Traditional Methods and New Fluorometric Methods to Determine Phytoplankton Nutrient Status for Freshwater Ecosystems, and Their Application in the Lower Laurentian Great Lakes 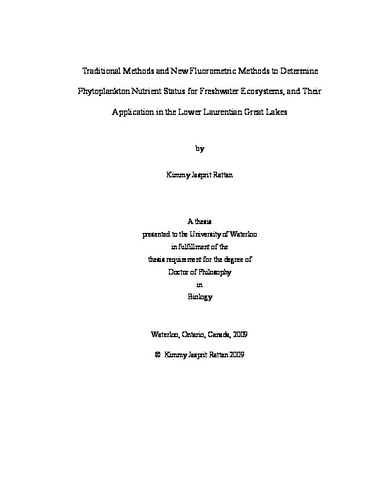 The Laurentian Great Lakes are the largest system of freshwater on earth containing 22% of the world’s supply. Although part of a single system, each lake shows substantial variation regarding physical, chemical and biological parameters. The main goals of this thesis were to characterize the nutrient status of natural phytoplankton communities while comparing several commonly used measurements of nutrient status and Chlorophyll a (Chl a) fluorescence measurements. The study sites include the western basin (WB), west-central basin (WCB), and central basin (CB) of Lake Erie, the Bay of Quinte in Lake Ontario, and Colpoys Bay in Lake Huron. Independent measures of nutrient status were assessed by measurements of nitrogen (N) debt, phosphorus (P) debt, particulate C:N:P ratios, and alkaline phosphatase activity (APA). Variable fluorescence of chlorophyll a was measured by pulse amplitude modulated (PAM) fluorometry and fast repetition rate (FRR) fluorometry in parallel with the independent measures. In 2005, the phytoplankton communities in Lake Erie were generally N deficient in May, P deficient in June, and neither N nor P deficient in September. The maximum dark adapted quantum yield (Fv/Fm) measured by PAM or FRRF was lower in May and June, and maximal in September, while the functional absorption cross section of photosystem II (σPSII) was maximal in May and June, and minimal in September. Relationships between the variable fluorescence indicators and independent measures of nutrient status showed strong associations with N or P deficient sites having low Fv/Fm and high σPSII. In 2006, the electron transport rate (ETR) and the initial slope (α) derived from the PAM fluorescence rapid light-response curves (RLC) were compared to independent measures and Fv/Fm measurements in Lake Erie. Relationships between ETR, α, independent measures of nutrient status, and Fv/Fm measurements revealed strong associations with nutrient status. Confirming previous reports, N deficiency was highest in the WB during isothermal conditions while P deficiency was highest in the CB during summer stratification. The fluorescence parameters generally decreased as the severity of N and P deficiency increased. N and P enrichment assays also revealed increased values of Fv/Fm, ETR, and α from N and P deficient samples over twenty-four hours. Additionally, spatial variability of P status was evaluated during summer stratification. Colpoys Bay, the most oligotrophic site, had the strongest P deficiency, and evidence for existence of P deficiency was weakest in the Bay of Quinte, the most eutrophic site. Nutrient enrichment assays revealed that all fluorescence parameters showed a positive response to P additions in oligotrophic sites, with no response in eutrophic sites. Community structure was also associated with nutrient status and Chl a fluorescence at all locations. In P deficient sites, nano-flagellates such as chrysophytes and cryptophytes were prevalent; cyanobacteria were dominant at sites that displayed N deficiency.