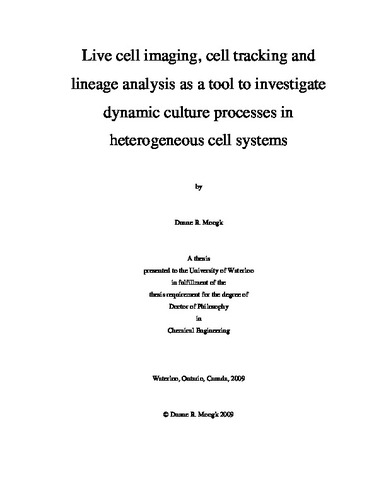 Live cell imaging can be used to study dynamic cellular systems at single cell resolution. In heterogeneous cell populations, analyzing cell properties at the single cell level reduces the generalization of results caused by population-based assays. This thesis details the implementation of live cell imaging and single cell tracking to characterize heterogeneous cell systems undergoing dynamic processes over multiple generations. This approach enables the consideration of both spatial and temporal variables as well as the mapping of cell phenotype trajectories along their generational lineages. Cell-, lineage-, and colony-level properties are used as descriptors of the underlying molecular mechanisms that they are produced by. These may be unexpected, emergent properties that can not be predicted or completely characterized at the molecular level. Analysis of these properties can reveal and characterize the properties and processes of dynamic, heterogeneous cell systems. Live cell imaging culture strategies were developed to enable characterization of both two- and three-dimensional cell systems. Computational modeling was performed to evaluate the conditions imposed by a confined imaging chamber that enables single cell resolution imaging of monolayer and multilayer cell systems. Imaging chamber dimensions and cell colony/aggregate sizes were calculated that would prevent the introduction of metabolite transport limitations and allow for stable, long term imaging. Methods for single cell tracking and analysis were also developed, which produces a database detailing the tracked, observed and extracted properties of every cell and colony, while maintaining the lineage structure of the data. Visualizations such as lineages, histograms and scatter plots were implemented to enable interactive data analysis and querying. These methods were used to characterize heterogeneity in two separate cell systems: human islet of Langerhans-derived progenitor cells, and human embryonic stem cells. Islet-derived progenitors are an expandable source of cells with potential for treatment of diabetes. Here, it was shown that there is an unequal contribution of islets to the progenitor derivation process. Islet-derived progenitors consist of two distinct sub-populations of cells that were distinguished by morphological identification during live cell image analysis. These sub-populations possess unique proliferation profiles and appear to exist in a dynamic state with each other. Three-dimensional tracking of islet progenitor derivation was implemented, but suffered from a lack of resolution to capture the dynamic nature of the transformation process. However, entire islets were imaged and tracked successfully under maintenance conditions, suggesting that this system may be useful for other cell types. These results highlight that live cell imaging and cell tracking may not be suitable for all cell systems and that inclusion of other analytical information, such as immunocytochemistry, would improve the power of cell tracking analysis. Human embryonic stem cell cultures were studied using live cell imaging to identify the mechanisms by which they differentiate to produce supportive niche cells. Cell tracking, morphology scoring and lineage analysis revealed a previously unappreciated level of heterogeneity within human embryonic stem cell colonies. The results show that a sub-population of human embryonic stem cells exist that are precursors to niche cell differentiation. However, these cells exist in a dynamic equilibrium with self-renewing stem cells, which is dependant on the presence of existing local niche cells. Sub-optimal niche conditions leads to the production of niche differentiation-competent cells and, significantly, considerable cell death. The effect of cell death is the clonal selection of self-renewing cells that contribute to colony expansion. Overall, these results highlight the importance of the co-transfer of existing niche cells and the dynamic balance that regulates human embryonic stem cell self-renewal and differentiation. This thesis displays the utility of live cell imaging, cell tracking and cell, colony and lineage analysis for studying dynamic heterogeneous systems. Furthermore, it highlight the fact that cell-, lineage- and colony-level analysis can uncover previously unappreciated heterogeneity and unknown sub-populations of cells. The system does not rely on characterization at the molecular level, but uses higher order measures to generalize them. However, future incorporation of cell, lineage and colony information with molecular-level information may results in analytical power not possible from either level alone. Such systems will be valuable tools in the growing fields of stem cell biology and systems biology.