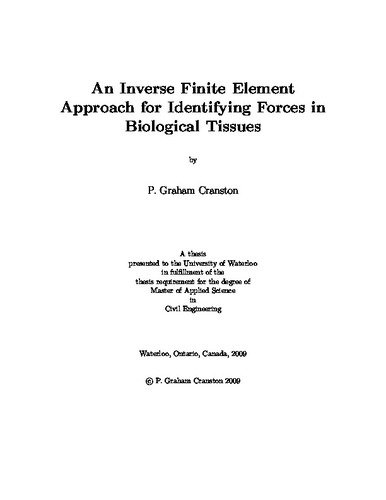 For centuries physicians, scientists, engineers, mathematicians, and many others have been asking: 'what are the forces that drive tissues in an embryo to their final geometric forms?' At the tissue and whole embryo level, a multitude of very different morphogenetic processes, such as gastrulation and neurulation are involved. However, at the cellular level, virtually all of these processes are evidently driven by a relatively small number of internal structures all of whose forces can be resolved into equivalent interfacial tensions γ. Measuring the cell-level forces that drive specific morphogenetic events remains one of the great unsolved problems of biomechanics. Here I present a novel approach that allows these forces to be estimated from time lapse images. In this approach, the motions of all visible triple junctions formed between trios of cells adjacent to each other in epithelia (2D cell sheets) are tracked in time-lapse images. An existing cell-based Finite Element (FE) model is then used to calculate the viscous forces needed to deform each cell in the observed way. A recursive least squares technique with variable forgetting factors is then used to estimate the interfacial tensions that would have to be present along each cell-cell interface to provide those forces, along with the attendant pressures in each cell. The algorithm is tested extensively using synthetic data from an FE model. Emphasis is placed on features likely to be encountered in data from live tissues during morphogenesis and wound healing. Those features include algorithm stability and tracking despite input noise, interfacial tensions that could change slowly or suddenly, and complications from imaging small regions of a larger epithelial tissue (the frayed boundary problem). Although the basic algorithm is highly sensitive to input noise due to the ill-conditioned nature of the system of equations that must be solved to obtain the interfacial tensions, methods are introduced to improve the resulting force and pressure estimates. The final algorithm returns very good estimates for interfacial tensions and intracellular cellular pressures when used with synthetic data, and it holds great promise for calculating the forces that remodel live tissue.