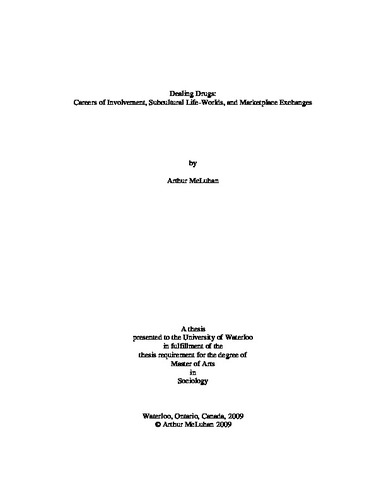 This thesis is an ethnography of drug dealers. Working from a Chicago School Symbolic Interactionist approach (Mead, 1934; Blumer, 1969), nineteen interviews were conducted with current and former drug dealers. I inquired into their careers (initial involvements, continuities, disinvolvements, reinvolvements) of participation in selling drugs. The data analysis is primarily located in three chapters – Chapters Five, Six, and Seven. Chapter Five considers people’s involvements in selling drugs as well as dealers’ interpersonal exchanges with their customers. In particular three processes are considered in Chapter Five: initial involvements in drug sales,expanding the customer base, and making sales. Chapter Six discusses dealers’ relationships with suppliers as well as dealers who become involved in supplying activities. This chapter discusses the matters of: making contacts with suppliers, working with suppliers, and becoming suppliers. Chapter Seven examines some of the identity allures and problematics of being a drug dealer as well as instances of disinvolvement and reinvolvement in drug dealing. This includes considerations of: striving for respectability, encountering regulatory agencies, and the problematics of disentanglement.