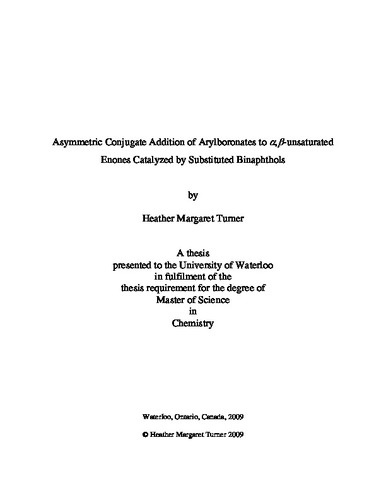 Conjugate addition reactions are one of the most widely used carbon-carbon bond forming reactions in organic synthesis. This reaction can form a chiral center and can be used for the synthesis of structurally complex compounds. Until now it has been necessary to use a chiral heavy metal catalyst in order to carry out asymmetric addition of aromatic groups to α,b-unsaturated enones via conjugate addition. Recently we have been successful in achieving the same task using an arylboronate as well as a catalytic amount of a chiral substituted binaphthol (BINOL). Using this reaction method great yields and enantioselectivities were achieved when diethyl phenylboronate was added to various enones and when various diethyl arylboronates were added to chalcone. This reaction is exciting because it eliminates the chance of having trace amounts of heavy metals in the final product, which is advantageous in such areas as the pharmaceutical industry.