Combinatorics and the KP Hierarchy 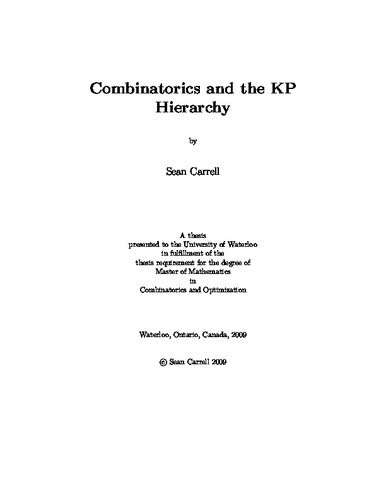 The study of the infinite (countable) family of partial differential equations known as the Kadomtzev - Petviashvili (KP) hierarchy has received much interest in the mathematical and theoretical physics community for over forty years. Recently there has been a renewed interest in its application to enumerative combinatorics inspired by Witten's conjecture (now Kontsevich's theorem). In this thesis we provide a detailed development of the KP hierarchy and some of its applications with an emphasis on the combinatorics involved. Up until now, most of the material pertaining to the KP hierarchy has been fragmented throughout the physics literature and any complete accounts have been for purposes much diff erent than ours. We begin by describing a family of related Lie algebras along with a module on which they act. We then construct a realization of this module in terms of polynomials and determine the corresponding Lie algebra actions. By doing this we are able to describe one of the Lie group orbits as a family of polynomials and the equations that de fine them as a family of partial diff erential equations. This then becomes the KP hierarchy and its solutions. We then interpret the KP hierarchy as a pair of operators on the ring of symmetric functions and describe their action combinatorially. We then conclude the thesis with some combinatorial applications.