Tactile Haptics: A Study of Roughness Perception in Virtual Environments 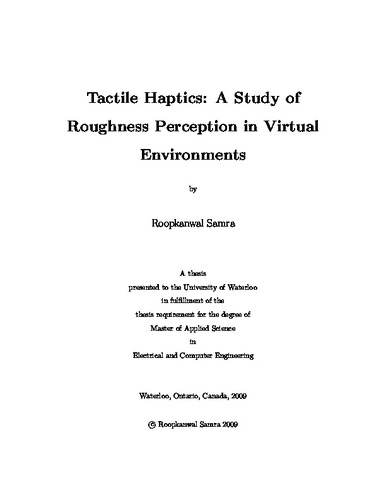 This thesis presents the design of a tactile device that can be used to display varying magnitudes of roughness. The device is designed to be attached to an existing force feedback device in order to create a package that is able to display both macro-level (force feedback) and micro-level (tactile feedback) information to the users. This device allows the users to feel a simulated texture by placing an index finger on an aperture. The stimulus is created with a spiral brush made of nylon bristles. The brush is attached to a DC motor and the speed and direction of rotation of the brush are used to generate textures at the fingertip through the aperture. Three psychophysical experiments are conducted to study the effects of speed and direction on the roughness perception. The first experiment is designed to investigate the sensitivity to a change in the speed of the brush. This experiment is conducted for two levels of base speed and it is found that as the base speed increases, the just noticeable difference (JND) with respect to speed decreases. In the second experiment, it is found that this tactile device is able to represent textures of rough nature, such as sandpaper. It is also found that the human roughness perception cannot be described in a unique manner. Two opposite definitions of rough textures are identified in this experiment. While some users relate an increase in the speed of the brush to increasing roughness, others relate it to decreasing roughness. Further, the results show that the effects of direction are insignificant on the roughness perception for both groups of users. In the third experiment, the effects of direction are studied more closely by presenting the two directions successively with a time gap of $0.5s$. It is found that with this small time gap, the users are able to discriminate between directions, unlike in the previous experiment. The roughness perception is affected by the change in direction when the time gap is small. These findings open further areas that need to be investigated before a robust tactile device can be designed.