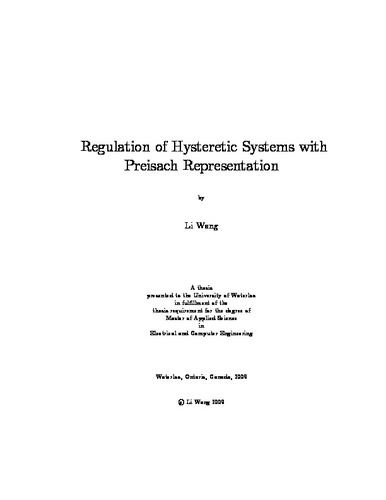 Piezoelectric actuators are well suited for high precision mechanical and electrical engineering applications. However, its performance in regulator configurations has been limited due to hysteresis. The hysteresis in these actuators means that multiple input states can result in the same output, which introduces a further design variable (initial state) in the regulation problem. It is proposed that certain initial states result in better regulation performance based on the structure of the Preisach model. These initial states are called “neutral states”. In this thesis, hysteresis and piezoelectric actuators are introduced as background information. The Preisach model is used in this work to describe the hysteresis behaviour of a customized shape control unit SS15 due to its convenient general structure and ability to model hysteresis. The representation tests are performed and a Preisach model is subsequently constructed and verified by comparing simulation and experimental results to ensure that the hysteresis inherent in the piezoceramic actuators of the SS15 is suitably described by this model. In order to evaluate the regulation performance for a given desired output, uniformly-distributed noise is injected at the input side of the SS15 in open- and closed-loop tests. It is demonstrated, by both simulation and experimental results, that the system output drifts less when it starts from the neutral state in open-loop tests. A PI regulator is implemented in the closed-loop tests. When the system is driven from the neutral state, both simulation and experimental results demonstrate that the system requires less control effort for closed-loop regulation.