Cortical and behavioural adaptations induced by bimanual movement training: an electrophysiological study in the healthy population 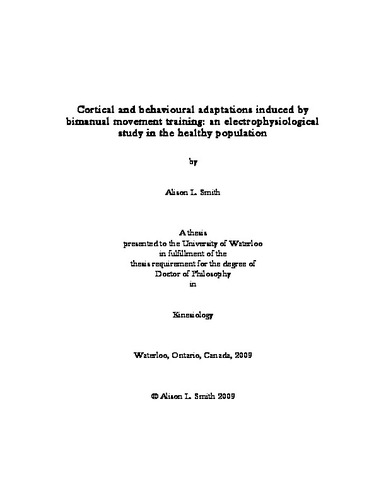 Bimanual movement training (BMT) of the upper extremity has been found to improve sensorimotor function of the stroke affected limb for some patients; however, the neurophysiological mechanism underlying behavioural enhancement remains unclear. Determining a measurement tool to gauge within-session cortical excitability modulations in response to training would be advantageous for stroke rehabilitation practitioners not only to understand the mechanism underlying behavioural enhancement, but it would also assess the usefulness of training interventions from an individualistic perspective. The purposes of the current thesis were four fold: 1) to gain a better understanding of the neurophysiological effects of short-term visually cued BMT, of varying types, upon the trained bimanual task and those that generalize to a unimanual task by way of the cue-related movement-related potential (MRP). 2) To determine the generators of the cue-related MRP, an event-related potential (ERP) associated with the preparation and execution of a cued movement versus the Bereitschaftspotential (BP), a similar ERP associated with self-paced movement, 3) to investigate kinematic parameters that may influence the cue-related MRP and 4) to investigate the usefulness of the MRP as a future measurement tool to assess within-session changes of cortical excitability associated with training interventions in the stroke patient population. For the purposes of establishing control data for future stroke related studies, the current thesis was devised to investigate the healthy population. We hypothesized that inphase (homologous motor movement) BMT more so than antiphase (antagonistic motor movement) BMT would induce cortical excitability modulations within preparatory and executory cortical regions for the trained bimanual task and a similar unimanual task. Two experiments using EEG and subsequent cue-related MRP revealed that inphase BMT more so than antiphase BMT enhanced the amplitude of the early MRP component denoting preparatory excitability, but not the late MRP component representing executory excitability, and this modulation would also occur despite a simulated flexion contracture. The localization of the cue-related early MRP was found to be predominantly over the lateral premotor cortex, differing from the self-paced early BP determined to predominantly represent SMA excitability. Further confirmation of the localization of the cue-related early MRP versus the self-paced early BP was obtained in another experiment where it was revealed that cued inphase BMT did not affect the amplitude of the early BP (SMA excitability) of a self-paced movement; therefore, cued inphase BMT did not modulate SMA excitability. In a fourth experiment, kinematic parameters such as movement rate, range of motion (ROM) and force production at movement onset or as an inertial load were assessed in relation to modulations of the three cue-related MRP components. The results indicated that the various kinematic parameters had differential modulatory effects upon the cue-related MRP. As a whole, the results of the thesis indicated that 1) the cue-related MRP can be used to assess within-session training-related cortical adaptations in response to inphase BMT. 2) MRP modulations in response to cued inphase BMT remain evident despite a restriction of range of motion and imposed tonic load, indicating the potential to use the MRP in the stroke patient population in future research. 3) The localization of the early MRP component of a cue-related movement originates from the lateral premotor cortex versus the SMA responsible for the early BP component of a self-paced movement, and 4) in order to use the MRP as a measure of cortical excitability, kinematic parameters such as a load placed upon the musculature must be controlled in an experimental design. The results of the experiments provide insight into the use of the cue-related MRP as a measure of cortical excitability modulation in response to cued inphase BMT, and will inform future training-related studies using the cued MRP as a measure of learning related adaptation in the healthy and stroke patient populations.