Will the Mediterranean Become "Too Hot" for Tourists?: A Reassessment 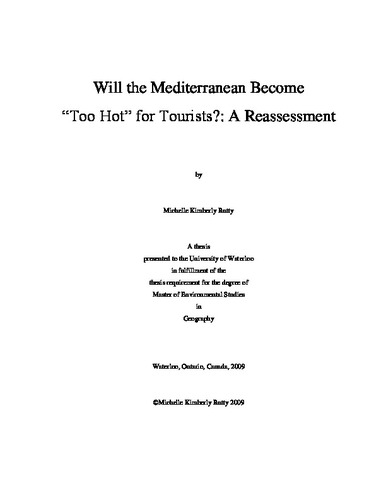 Numerous studies emphasize that climate, particularly temperature, is one of the most important resources of a tourist destination. With the onset of climate change, this climatic parameter of tourist destinations may change, leading some scientists and the media to claim that some destinations, including the Mediterranean, will become “too hot” for tourist comfort by as early as 2020 or 2030. This study examines tourists’ perceived and stated ideal and unacceptable conditions for multiple climate variables (temperature, rain, wind and sky conditions) for two popular Mediterranean tourism segments; beach/3S and urban sightseeing holidays. A survey instrument was administered to university students (n=866) in five countries that represent source markets for the Mediterranean (Austria, Germany, The Netherlands, Sweden and Switzerland). The survey results were applied to a baseline climate (1961-1990) and a minimum and maximum climate change scenario (A1B emission scenario for 2080-2099). With the exception of Athens, Greece, the results suggest that the media’s claims are erroneous, with only one urban destination incurring “unacceptably hot” conditions by mid-century and only a few destinations becoming “unacceptably hot” by the end of the 21st century. A more imminent threat could be the influence the media claims may have on tourists’ perception of the climate in the Mediterranean region. It is anticipated that these findings will hold important implications for critically assessing the potential impact of climate change in the study area and other destinations more broadly, and can be used to refine models intended to predict tourism demand and international tourism flows under climate change.