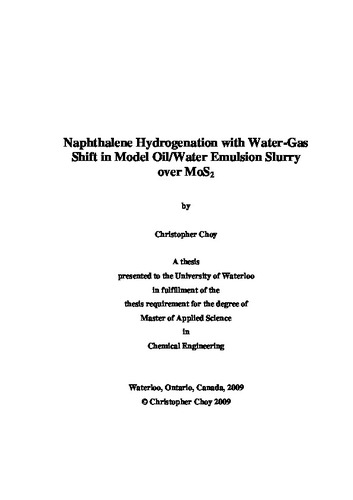 Catalytic naphthalene hydrogenation to tetralin in water/hydrocarbon emulsions with simultaneous water gas shift as the hydrogen source was performed in a 300 ml batch autoclave as a model for aromatic hydrogenation in water/bitumen emulsions. The catalyst utilized was an unsupported and dispersed type based on molybdenum sulfide (MoS2). Distinguishing the fate of hydrogen from water as opposed to molecular hydrogen in hydrogenation and water gas shift was accomplished by utilizing deuterium oxide (D2O) with NMR spectroscopy. The use of D2O allowed determination of isotope effects when compared with H2O. Diffuse Reflectance Infrared Fourier Transform Spectroscopy was performed to observe CO adsorption on the MoS2 sulfide surface. Ruthenium was tested as a potential candidate to enhance the activity of the Mo catalyst. Iron, nickel and vanadium were utilized in combination with molybdenum to test promotional/inhibitive activity during naphthalene hydrogenation and water gas shift since Ni and V are found in significant quantities in real bitumen feed. Finally, a multifactorial experiment was performed to test the hydrogenation and water gas shift activity of a binary VNiMo-sulfide catalyst towards H2S partial pressure, temperature and H2 versus CO atmospheres. Deuterium from D2O was incorporated into both saturated and aromatic hydrogen positions in tetralin products. Calculation of a Hydrogenation Index and Exchange Index indicated the extent of H-exchange is greater than hydrogenation. Exchange between D2O and organic products was enhanced with the MoS2 catalyst under H2 or CO compared to N2. A kinetically measured isotope effect of 1.58 was in agreement with a quasi-equilibrium thermodynamic isotope effect for O-H dissociations measured in the literature. A true kinetic isotope effect may be masked by transient surface concentrations occurring under batch conditions. Two strong vibrational bands associated with adsorbed CO were observed over MoS2 above 160 °C. Activation of the MoS2 surface with CO produces COS, suggesting an analgous mechanism to the production of H2S during reduction in H2. In the presence of H2S, Ru displayed low catalytic activity for both water gas shift and naphthalene hydrogenation, attributed to incomplete sulfidation to active RuS2. FeMo and VMo exhibited lower hydrogenation activity than Mo, but the water gas shift activity of VMo was high. A ternary VNiMo displayed lower hydrogenation activity than NiMo and Mo but was higher than VMo, implying Ni could offset the inhibition caused by V. Recycle of V and Ni rich asphaltene residues in catalytic slurry upgrading may therefore be feasible. An analysis of the effect of H2S pressure, temperature and type of reduction gas (CO vs. H¬2) concluded that temperature had the greatest positive effect on rate, followed by a small interaction effect of temperature/gas type and PH2S/gas type. The proximity to equilibrium conversions in WGS limited the analysis, while equilibrium limited the conversion of naphthalene at 380 °C in the batch reactor.