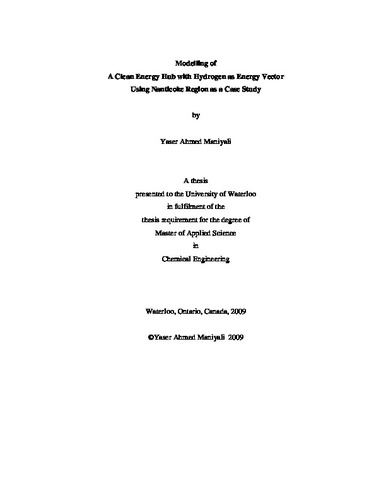 An ‘energy hub’ is composed of an interaction of energy loads and energy sources that will include different technologies for power generation, energy storage, and energy conversion. These technologies could include transformers, wind turbines, electrolyzers, solar panels, and fuel cells. Hydrogen is an ideal energy vector for use in energy hubs where energy can be produced from multiple energy resources like nuclear and renewable energy sources. It is easily stored and distributed, and it can be used for multiple end-uses such as electrical load levelling or in transportation applications. Nuclear power provides a greenhouse gas free, reliable and stable supply of electricity to an energy hub in an efficient and economic manner and as a result is the preferred base load source of power. In this work a model of a clean energy hub comprising of a nuclear plant, wind turbines, solar panels, and biomass reactors was developed using Matlab/Simulink. The model was used to develop a conceptual design of an energy hub with Nanticoke, Ontario, serving as the case study region. The hub was designed to replace existing coal-based power generating facilities and meet electricity demands, as well as current and future hydrogen demands for local industry and transportation as projected in 2030. Conceptual equipment sizing and costing for solar panels, nuclear plants, wind turbines, biomass reactors, fuel cells, and electrolyzers are considered. The cost for hydrogen storage was considered while phasing in revenue generated, and environmental pollution avoided by using clean electricity and hydrogen powered vehicles. It was observed that nuclear reactors, followed by biomass reactors, followed by off-shore wind turbines, followed by on-shore wind turbines, and finally followed by solar panels represent the sequence of technology adoption in order to maximize environmental and economic benefits, as this represents the cost and energy effectiveness hierarchy for electricity generation as observed while analyzing hub costs for meeting electricity demand. It can also be concluded that the hub for electricity generation is most economical if the nuclear reactor capacity installed is very close to the average yearly electricity demand required by the grid, and the nuclear reactor is operated at full capacity throughout the year while augmented with other renewable technologies. During periods of excess power hydrogen is produced and stored onsite, and hydrogen fuel cells are subsequently used to meet peak electricity demand. Underground hydrogen storage is the most economical option for all energy hubs analyzed. In some scenarios a small amount of coal generation capacity was maintained to assist with peak power demand through a very limited time of the year. The analysis concluded that at this time fuel cells are a more costly option for generating electricity even after considering emissions revenue with the cogeneration of hydrogen for industry and transportation, as well as for electricity. It is more economical to convert excess power into hydrogen using electrolyzers and sell it to industrial sectors and transportation sectors in the early years of an energy hub. A number of scenarios were analyzed that comprise of different combinations of technology in various hub designs. In an ‘electricity cost effective’ scenario the hub was found to meet the electrical demand at a cost of 10.23 cents per KWh, while reducing CO2 emissions by 11.6 million tonnes per year. In a ‘hydrogen economy’ scenario 67 million kilograms of hydrogen were sold to the hydrogen economy per year at $4.82 per kg, while the electrical demand of the hub was met a cost of 11.09 cents per KWh, while reducing CO2 emissions by 13.5 million tonnes per year. In an ‘emission reduction’ scenario 14.9 million tonnes of CO2 emissions where reduced, 197 million kg of hydrogen was sold to the hydrogen economy per year at $4.82 per kg, while the electrical demand of the hub was met a cost of 15.64 cents per KWh. Most of the hub design configuration and operational scenarios considered in the analysis become economically viable if electricity prices are approximately $65 per MWh, if gasoline prices average approximately $1.50 per litre over the next 20 years, and if the price of carbon credits or CO2 per tonne goes up to around $ 35 – 40 per tonne. Therefore, these parameters must be closely monitored to determine energy hub profitability.