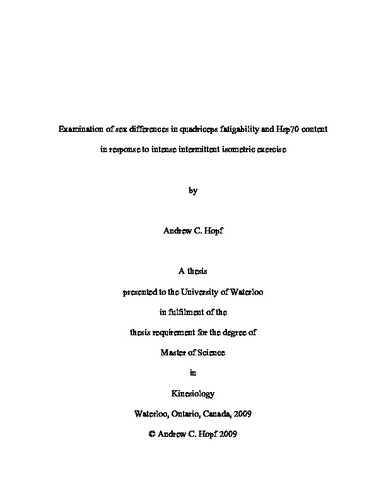 The purpose of this study was to determine if there are sex differences in induced heat shock protein 70 (Hsp70) expression in human skeletal muscle under basal conditions and in response to intense intermittent isometric exercise. Furthermore, this study examined potential sex differences in muscle fatigability and sarcoplasmic reticulum (SR) function for up to 9 days following the bout of exercise. In total, 6 male (20 ± 0.5 years of age, 70.88 ± 10.25 kg, mean ± SE) and 6 female participants (19 ± 0.25 years of age, 58.02 ± 5.82 kg, mean ± SE) were recruited for this study to do one legged intermittent isometric exercise with a 50% duty cycle (5 sec contraction: 5 sec relaxation) at 60% of their maximal voluntary contraction (MVC) for 30 minutes. Muscle biopsies, blood samples and muscle stimulation measurements were taken prior to starting exercise for assessment of baseline values. These same measures were taken immediately POST exercise and at 24(R1), 72(R3), 144(R6) and 216(R9) hours following the exercise. Muscle samples were analyzed for exercise and recovery response of Hsp70, sarco(endo)plasmic reticulum Ca2+ATPase (SERCA)1 and SERCA2 protein content, as well as measurements of maximal Ca2+ ATPase activity and Ca2+ uptake. Blood samples were also analyzed for serum estrogen and creatine kinase concentrations. The results from this study show that there are no differences in basal Hsp70 protein content between males and females, and that females have a blunted (no increase up to 9 days post exercise) Hsp70 response following a bout of intense exercise in comparison to males who had a robust response. Immediately following exercise females had smaller decrements in MVC and electrically stimulated force (10 and 100Hz). It was also found that at low frequencies of stimulation (10Hz), females were able to recover at a quicker rate than males. There was no evidence that the decrements in force or the differences in recovery time between males and females were due to alterations in SERCA protein content or function. This thesis is the first study in humans to show that there is sexual dimorphism in the exercise induced Hsp70 response to exercise.