Environmental impacts of cage aquaculture in the southeast arm of Lake Malawi: water and sediment quality and food web changes 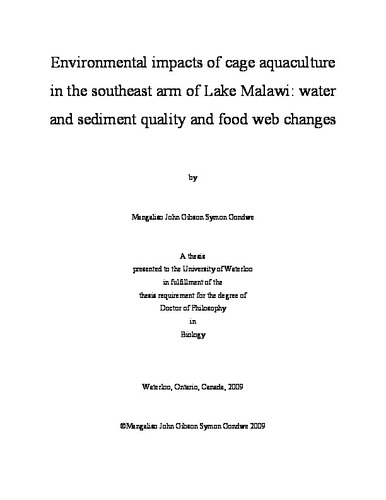 Lake Malawi is a great lake not only because of its size (30,800 km2) but also because of its unique fish diversity. The lake contains the highest number of freshwater fish species in the world. The fish species are hypothesized to have radiated within the lake, which is 1-2 million years old. The collapse of the capture fishery in Lake Malawi between the 1970s and 1990s led to the launch of cage culture of indigenous fish species in 2004 in the south east arm of the lake. While cage culture has been practiced for many years in temperate lakes and seas, the fish farm in Lake Malawi is the first in the African Great Lakes and, therefore, not much information currently exists that is relevant to the impact of cage culture on such a large, species-rich tropical lake. Consequently, a study was done between January and December, 2007, at the fish farm in Lake Malawi to determine potential impacts of cage wastes on the environment. The study found that, just like in temperate systems where 70-87% of C, N and P added through feed get dispersed into the environment, discharges from fish cages in Lake Malawi were between 71-88% of the nutrients added through feed. The discharges were proportional to the amount of feed added so that as production and feed supply increase over time, more cage wastes would be generated and released into the environment. The discharges were exacerbated by poor stocking and feeding regimes. Production periods were longer (mean of 376±42 days) than if recommended stocking and feeding rates were followed. Feed quality may also have affected production performance and waste generation in the cages, but was not studied. The cage wastes were incorporated into the food web and support the wild fishes in the vicinity of the fish farm. Impacts of the cage wastes on the water column and sediments in the vicinity of the cages were minimal during the study period, probably because of rapid and efficient dispersion of the wastes by strong water currents, that averaged 9.3 cm s-1, through the cages and high consumption of the cage wastes by large numbers of wild fishes which aggregated around the cages. The wild fishes also helped to disperse the cage wastes over a larger area through consumption, translocation and defecation. However, as production increases, the amount of cage wastes generated may overwhelm mitigation by dispersion by water currents and consumption by wild fishes, particularly if many cages are deployed close together and interfere with current flows. Based on my observations, a fish farm that produces 15,000 tonnes fish/yr in Lake Malawi would generate 1249, 113 and 21 megamoles/yr of C, N and P, respectively, that are comparable or higher than DOC, TDN and TDP loadings observed in the most disturbed large river systems draining into Lake Malawi. The impacts of these river systems in Lake Malawi have been well documented, particularly around river mouths and in the more densely populated and shallower southern portion of the lake, where algal communities and their sedimentation rates have begun to change. Cage culture discharges may accelerate these changes.