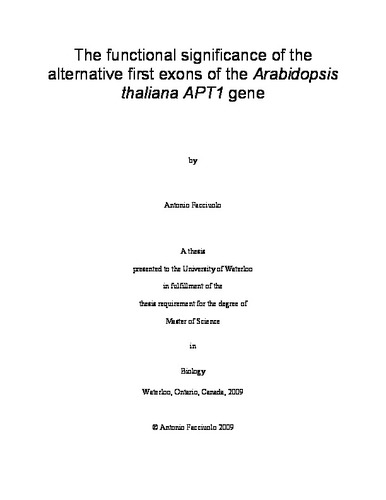 In plants, adenine nucleotides are essential for nucleic acid synthesis, as cofactors for biochemical reactions, and as precursors for the biosynthesis of the phytohormone cytokinin. Adenine nucleotides, such as AMP, are synthesized by the de novo synthesis pathway involving 10 sequential enzymatic reactions and 7 ATP/GTP molecules, and by the less energy-demanding salvage reactions. The enzymes catalyzing the latter route collectively make up the purine salvage pathway. The predominant enzyme in purine salvage is adenine phosphoribosyltransferase (APT), which catalyzes the one-step conversion of adenine to AMP. Plant APTs are also thought to contribute to the metabolism of cytokinins by interconverting the physiologically active base forms into their inactive nucleotide forms. In Arabidopsis thaliana APT is encoded by a five-member gene family, where APT1 contributes 99% of the APT activity. The APT1 gene has a six-exon gene structure that is present in APT genes of other organisms. Recently, expressed sequence tag (EST) collections have shown that the APT1 locus gives rise to a second, longer transcript variant that contains an additional 5´ terminal exon. For the purposes of this research the longer isoform has been designated APT1.1 and the shorter version, APT1.2. The aim of the first part of my thesis research was to determine the functional significance of these two transcript variants. Semi-quantitative RT-PCR showed that APT1.1 and APT1.2 transcripts are equally abundant in leaf and floral organs. However, immunoblot analysis revealed that APT1.2 is constitutively expressed, while APT1.1 is subject to post-transcriptional regulation in both organs. Using recombinant APT1.1 protein, preliminary enzymatic assays showed this protein to be very active on adenine substrates. Transgenic lines were constructed that either constitutively expressed the APT1.1 ORF fused to GFP protein, or that only expressed an Exon 1-GFP fusion protein from the native APT1 promoter. In both plant lines GFP localization was observed in stationary punctate bodies in mesophyll cells, whereas constitutive expression of the APT1.1 ORF also showed co-localization of GFP with chlorophyll autofluorescence. Although the identity of these punctate-bodies is currently inconclusive, preliminary data using transmission electron microscopy show that these bodies may be localized in areas of the chloroplast devoid of chlorophyll. Finally, bioinformatic analysis of available plant ESTs predicts that many other plants species may contain a similar gene structure to APT1 of Arabidopsis that gives rise to a cytosolic APT, and a chloroplast-localized APT. Interestingly, the only phenotype previously identified as arising from APT1-deficiency was aborted pollen development in a point mutant annotated as apt1-3. Recently, a novel APT1-deficient mutant was recovered during a screen for mutants that were tolerant to chemically induced oxidative stress. The mutant, oxt1, contains a T-DNA insertion element between the first and second exon of APT1 and surprisingly is as fertile as WT. Thus, the second part of this research was to determine the basis of fertility in the oxt1 mutant. A genetic cross between these two mutants resulted in an F1 plant that is a developmental chimera of both mutants. The initial siliques on the plant were fertile like oxt1, whereas the later siliques on the plant were sterile like apt1-3. Measurements of adenine and cytokinin levels showed substantial alterations in these metabolite levels. Thus, these metabolites may be potential contributors to the diverse phenotypes observed in each mutant. The discovery and characterization of the unusual phenotype of oxt1apt1-3 hybrids will lead the way in providing a model system to study changes in metabolite levels that contribute to the shift from fertility to sterility.