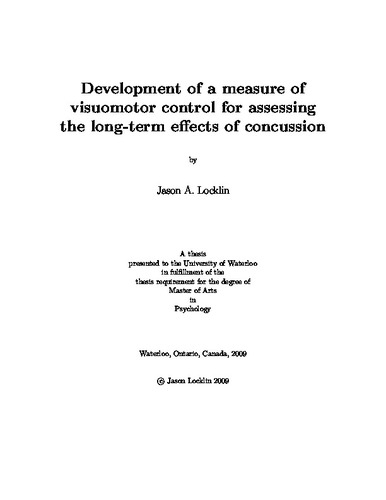 Recently, researchers have found evidence that after a concussion, residual visuomotor control deficits may linger longer than working memory or psychomotor speed deficits. All of the major computer administered test batteries currently in use for concussion management rely on examination of the latter tasks, and lack any measure of visuomotor control. The present research set out to develop a task to measure visuomotor performance. Using a touch-screen computer, the task required participants to point towards or away from (i.e., antipointing) a target in a design simmilar to an anti-saccade task. The task required participants to use visual information to execute controlled movements, and is designed to measure movement planning, execution performance and accuracy. The task was delivered to a large sample of healthy individuals to develop a normative performance data set. A self-report questionnaire was used to identify a small group of individuals from the normative population who were identified with a prior history of concussion. These individuals were directly contrasted with the healthy individuals. While only a few reported moderate or severe concussions, and information about recency and number of occurrences was unavailable, performance differences were observed --providing evidence of residual deficits. In particular, while concussed individuals were not slower, or less accurate overall than the healthy population on the task, they demonstrated unusual hand and spatial asymmetries. Future research will compare recently concussed individuals with the normative set developed here, and will make direct comparisons with existing computer administered test batteries to determine the efficacy of visuomotor tasks for detecting the long-term effects of concussion.

Jason Alexander Locklin (2009). Development of a measure of visuomotor control for assessing the long-term ef fects of concussion. UWSpace. http://hdl.handle.net/10012/4740