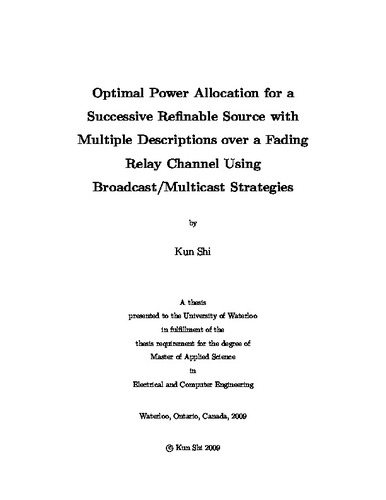 In a wireless fading relay system with multicast/broadcast transmission, one of the most crucial challenges is the optimization of a transmission rate under multiuser channel diversity. Previously reported solutions for mitigating the vicious effect due to multi-user channel diversity have been mainly based on superposition coded multicast, where an optimal power allocation to each layer of modulated signals is determined. Many previous studies investigated a harmonic interplay between the successively re nable (SR) content source and a layered modulation via superposition coding (SPC) over the multicast/broadcast channels. By jointly considering the successive re nement characteristic at the source and the dependency of the layered modulation at the channel, a graceful fexibility can be achieved on a group of users with di erent channel realizations. Here most of the receivers are supposed to obtain the base quality layer information modulated in a lower rate, while the receivers with better channel realizations will obtain more information by re ning the base quality layer information using the enhancement quality layer information. In particular, the optimal power allocation for a SR source over a fading relay channel using broadcast/multicast strategy can be determined such that the minimum distortion of total received information is produced. However, a quality layer of data in a successively refined source may not be decodable if there is any loss of channel codewords, even if the corresponding longterm channel realization is su cient for decoding. To overcome this problem, one of the previous studies introduced a framework of coded video multicast, where multiple description coding (MDC) is applied to an SR content source and is further mapped into a layered modulation via SPC at the channel. Up till now, there has not been a rigorous proof provided on the bene t of manipulating the two coding techniques, (i.e. MDC and SPC), nor has any systematic optimization approach been developed for quantifying the parameter selection. Cooperative relaying in wireless networks has recently received much attention. Because the received signal can be severely degraded due to fading in wireless communications, time, frequency and spatial diversity techniques are introduced to overcome fading. Spatial diversity is typically envisioned as having multiple transmit and/or receive antennas. Cooperation can be used here to provide higher rates and results in a more robust system. Recently proposed cooperation schemes, which take into account the practical constraint that the relay cannot transmit and receive at the same time, include amplify-forward(AF), decode-forward(DF), and compress-forward(CF). In this study, in a fading relay scenario, a proposed framework is investigated to tackle the task of layered power allocation, where an in-depth study is conducted on achieving an optimal power allocation in SPC, such that the information distortion perceived at the users can be minimized. This thesis provides a comprehensive formulation on the information distortion at the receivers and a suite of solution approaches for the developed optimization problem by jointly considering MDC and SPC parameter selection over the fading relay channel.