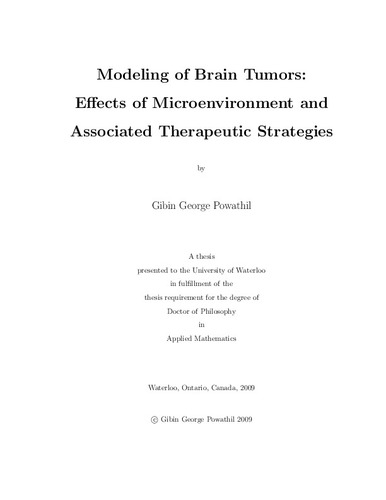 Gliomas are the most common and aggressive primary brain tumors. The most common treatment protocols for these brain tumors are combinations of surgery, chemotherapy and radiotherapy. However, even with the most aggressive combination of surgery and radiotherapy and/or chemotherapy schedules, gliomas almost always recur resulting in a median survival time for patients of not more than 12 months. This highly diffusive and invasive nature of brain tumors makes it very important to study the effects of these combined therapeutic strategies in an effort to improve the survival time of patients. It is also important to study the tumor microenvironment, since the complex nature of the cerebral vasculature, including the blood brain barrier and several other tumor-induced conditions such as hypoxia, high interstitial pressure, and cerebral edema affect drug delivery as well as the effectiveness of radiotherapy. Recently, a novel strategy using antiangiogenic therapy has been studied for the treatment of brain tumors. Antiangiogenic therapy interferes with the development of tumor vasculature and indirectly helps in the control of tumor growth. Recent clinical trials suggest that anti-angiogenic therapy is usually more effective when given in combination with other therapeutic strategies. In an effort to study the effects of the aforementioned therapeutic strategies, a spatio-temporal model is considered here that incorporates the tumor cell growth and the effects of radiotherapy and chemotherapy. The effects of different schedules of radiation therapy is then studied using a generalized linear quadratic model and compared against the published clinical data. The model is then extended to include the interactions of tumor vasculature and oxygen concentration, to explain tumor hypoxia and to study various methods of hypoxia characterizations including biomarker estimates and needle electrode measurements. The model predicted hypoxia is also used to analyze the effects of tumor oxygenation status on radiation response as it is known that tumor hypoxia negatively influences the radiotherapy outcome. This thesis also presents a detailed analysis of the effects of heterogenous tumor vasculature on tumor interstitial fluid pressure and interstitial fluid velocity. A mathematical modeling approach is then used to analyze the changes in interstitial fluid pressure with or without antiangiogenic therapy.