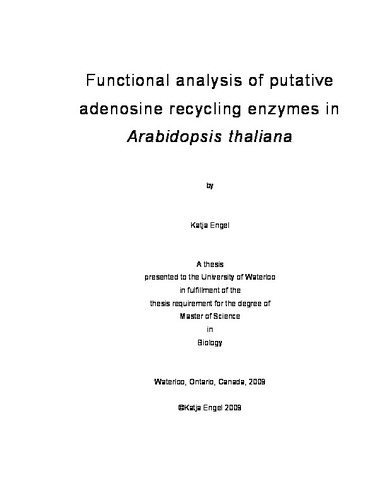 Adenosine (Ado) salvage is essential in plant development. The lack of Ado kinase activity (ADK) in Arabidopsis thaliana adk1 adk2 double mutants results in embryonic lethality; reduction of ADK expression causes a pleiotropic phenotype due to the accumulation of Ado inhibiting transmethylation activities. The phenotype of ADK mutants shows that this enzyme plays a critical role in Ado salvage but the functional significance of the other putative Ado recycling enzymes Ado deaminase (ADA) and Ado nucleosidase (ADN) in Arabidopsis thaliana have yet to be elucidated. ADA catalyzes the irreversible deamination of Ado to inosine. The locus At4g04880 (AtADA) of A. thaliana is annotated as encoding a putative ADA, based on its amino acid sequence similarity and the presence of important, conserved catalytic residues. However, indirect and direct spectrophotometric activity assays of the recombinant enzyme demonstrated that the gene product of this locus does not possess ADA activity; complementation experiments to test for the functionality of the AtADA product in A. thaliana and E. coli confirmed its lack of ADA activity. Instead, phylogenetic analysis revealed that AtADA belongs to the group of ADA-like (ADAL) proteins, a group closely related to ADAs that to date have not been shown to have ADA activity. AtADA is no exception as it also lacks ADA activity based on the in vivo and in vitro experiments outlined in this thesis. Thus, the locus At4g04880 should be re-annotated as ADAL. The question of the function of AtADAL cannot be answered as of yet; in general, the knockout of ADA gene product demonstrated that At4g04880 is not essential for Arabidopsis growth. Since no further ADA-related genes exist in the genome of Arabidopsis it is concluded that ADA activity is not present in this plant. ADN catalyzes the conversion of purine and pyrimidine ribosides to their corresponding bases; although it prefers Ado as a substrate it also acts on cytokinins. The activity of this enzyme has been described in several plant species but no corresponding genes have been identified to date. The genome of Arabidopsis was screened for ADN genes using an inosine-uridine nucleoside hydrolase sequence from the protozoa Crithidia fasciculata. Two genes, annotated as ADN1 and ADN2 were identified and their gene products were studied using a spectrophotometric assay. The substrate spectrum of ADN2 includes both purine and pyrimidine nucleosides but it prefers to utilize uridine. Thus, ADN2 is proposed to be involved in the purine and pyrimidine salvage in Arabidopsis but predominantly in uridine recycling. Recombinant ADN1 did not show activity on any of the tested substrates. Even though the in vivo role of both ADNs is still uncertain, due to their lack or low activity on Ado there may yet be the ADN gene in the Arabidopsis genome which likely acts on both adenosine and cytokinin ribosides.