Transient Dynamics of Continuous Systems with Impact and Friction, with Applications to Musical Instruments 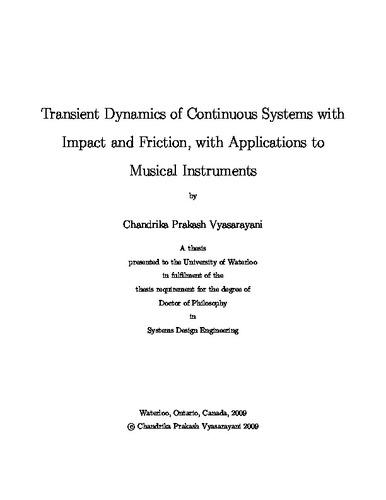 The objective of this work is to develop mathematical simulation models for predicting the transient behaviour of strings and beams subjected to impacts. The developed models are applied to study the dynamics of the piano and the sitar. For simulating rigid point impacts on continuous systems, a new method is proposed based on the unit impulse response. The developed method allows one to relate modal velocities before and after impact, without requiring the integration of the system equations of motion during impact. The proposed method has been used to model the impact of a pinned-pinned beam with a rigid obstacle. Numerical simulations are presented to illustrate the inability of the collocation-based coefficient of restitution method to predict an accurate and energy-consistent response. The results using the unit-impulse-based coefficient of restitution method are also compared to those obtained with a penalty approach,with good agreement. A new moving boundary formulation is presented to simulate wrapping contacts in continuous systems impacting rigid distributed obstacles. The free vibration response of an ideal string impacting a distributed parabolic obstacle located at its boundary is analyzed to understand and simulate a sitar string. The portion of the string in contact with the obstacle is governed by a different partial differential equation (PDE) from the free portion represented by the classical string equation. These two PDEs and corresponding boundary conditions, along with the transversality condition that governs the dynamics of the moving boundary, are obtained using Hamilton's principle. A Galerkin approximation is used to convert them into a system of nonlinear ordinary differential equations, with time-dependent mode-shapes as basis functions. The advantages and disadvantages of the proposed method are discussed in comparison to the penalty approach for simulating wrapping contacts. Finally, the model is used to investigate the mechanism behind the generation of the buzzing tone in a sitar. An alternate formulation using the penalty approach is also proposed, and the results are contrasted with those obtained using the moving boundary approach. A model for studying the interaction between a flexible beam and a string at a point including friction has also been developed. This model is used to study the interaction between a piano hammer and the string. A realistic model of the piano hammer-string interaction must treat both the action mechanism and the string. An elastic stiff string model is integrated with a dynamic model of a compliant piano action mechanism with a flexible hammer shank. Simulations have been used to compare the mechanism response for impact on an elastic string and a rigid stop. Hammer head scuffing along the string, as well as length of time in contact, were found to increase where an elastic string was used, while hammer shank vibration amplitude and peak contact force decreased. Introducing hammer-string friction decreases the duration of contact and reduces the extent of scuffing. Finally, significant differences in hammer and string motion were predicted for a highly flexible hammer shank. Initial contact time and location, length of contact period, peak contact force, hammer vibration amplitude, scuffing extent, and string spectral content were all influenced.