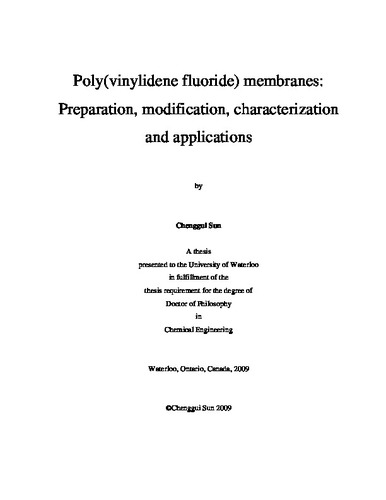 Hydrophobic microporous membranes have been widely used in water and wastewater treatment by microfiltration, ultrafiltration and membrane distillation. Poly(vinylidene fluoride) (PVDF) materials are one of the most popular polymeric membrane materials because of their high mechanical strength, excellent thermal and chemical stabilities, and ease of fabrication into asymmetric hollow fiber membranes. In this work, specialty PVDF materials (Kynar 741, 761, 461, 2851, RC-10186 and RC10214) newly developed by Arkema Inc. were used to develop hollow fiber membranes via the dry/wet phase inversion. These materials were evaluated from thermodynamic and kinetic perspectives. The thermodynamic analysis was performed by measuring the cloud points of the PVDF solution systems. The experimental results showed that the thermodynamic stability of the PVDF solution system was affected by the type of polymer and the addition of additive (LiCl); and the effects of the additive (LiCl) depended on the type of polymer. The kinetic experiments were carried out by determining the solvent evaporation rate in the “dry” step and the small molecules (solvent, additive) diffusion rate in the “wet step”. Solvent evaporation in the early stage could be expressed quantitatively. In the “wet” step, the concentrations of solvent and additive had a linear relationship with respect to the square root of time (t1/2) at the early stage of polymer precipitation, indicating that the mass-transfer for solvent-nonsolvent exchange and additive LiCl leaching was diffusion controlled. The kinetic analysis also showed that the slope of this linear relationship could be used as an index to evaluate the polymer precipitation rate (solvent-nonsolvent exchange rate and LiCl leaching rate). The extrusion of hollow fiber membranes was explored, and the effects of various fabrication parameters (such as dope extrusion rate, internal coagulant flow velocity and take-up speed) on the structure and morphology of the hollow fiber membranes were also investigated. The properties of the hollow fiber membranes were characterized by gas permeation method and gas-liquid displacement method. The morphology of the hollow fibers was examined by scanning electron microscope (SEM). It was found that Kynar 741 and 2851 were the best among the PVDF polymers studied here for the fabrication of hollow fiber membranes. In order to reduce the problems associated with the hydrophobicity of PVDF on hollow fiber module assembly, such as tubesheet leaking through problem and fouling problem, amine treatment was used to modify PVDF membranes. Contact angle measurements and filtration experiments were performed. Fourier-transform infrared (FT-IR) spectroscopy and energy dispersive x-ray analysis (EDAX) were used to analyze the modified polymer. It was revealed that the hydrophilicity of the modified membrane was improved by amine treatment and conjugated C=C and C=O double bonds appeared along the polymer backbone of modified PVDF. Hollow fiber membranes fabricated from Kynar 741 were tested for water desalination by vacuum membrane distillation (VMD). An increase in temperature would increase the water productivity remarkably. Concentration polarization occurred in desalination, and its effect on VMD could be reduced by increasing the feed flowrate. The permeate pressure build-up was also investigated by experiments and parametric analysis, and the results will be important to the design of hollow fiber modules for VMD in water desalination.