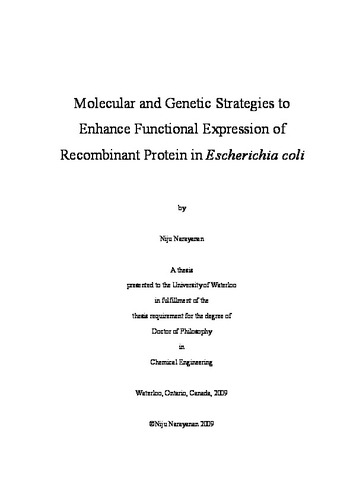 The versatile Escherichia coli facilitates protein expression with relative simplicity, high cell density on inexpensive substrates, well known genetics, variety of expression vectors, mutant strains, co-overexpression technology, extracytoplasmic secretion systems, and recombinant protein fusion partners. Although, the protocol is rather simple for soluble proteins, heterologous protein expression is frequently encountered by major technical limitations including inefficient translation, formation of insoluble inclusion bodies, lack of posttranslational modification mechanisms, degradation by host proteases, and impaired cell physiology due to host/protein toxicity, in achieving functional expression of stable, soluble, and bioactive protein.. In this thesis, model protein expression systems are used to address the technical issues for enhancing recombinant protein expression in E. coli. When yellow fluorescence protein (YFP) was displayed on E. coli cell surface, the integrity of the cell envelope was compromised and cell physiology was severely impaired, resulting in poor display performance, which was restored by the coexpression of Skp, a periplasmic chaperone. On the basis of monitoring the promoter activities of degP, rpoH, and cpxP under various culture conditions, it was demonstrated that the cell-surface display induced the σE extracytoplasmic stress response, and PdegP::lacZ was proposed to be a suitable “sensor” for monitoring extracytoplasmic stress. Intracellular proteolysis has been recognized as one of the key factors limiting recombinant protein production, particularly for eukaryotic proteins heterologously expressed in the prokaryotic expression systems of E. coli. Two amino acids, Leu149 and Val223, were identified as proteolytically sensitive when Pseudozyma antarctica lipase (PalB) was heterologously expressed in Escherichia coli. The functional expression was enhanced using the double mutant for cultivation. However, the recombinant protein production was still limited by PalB misfolding, which was resolved by DsbA coexpression. The study offers an alternative genetic strategy in molecular manipulation to enhance recombinant protein production in E. coli. To overcome the technical limitations of protein misfolding, ineffective disulfide bond formation, and protein instability associated with intracellular proteolysis in the functional expression of recombinant Pseudozyma antarctica lipase B (PalB) in Escherichia coli, an alternative approach was explored by extracellular secretion of PalB via two Sec-independent secretion systems, i.e. the α-hemolysin (Type I) and the modified flagellar (Type III) secretion systems, which can export proteins of interest from the cytoplasm directly to the exterior of the cell. Bioactive PalB was expressed and secreted extracellularly either as HlyA fusion (i.e. PalB-HlyA via Type I system) or an intact protein (via Type III system) with minimum impact on cell physiology. However, the secretion intermediates in the intracellular fraction of culture samples were non-bioactive even though they were soluble, suggesting that the extracellular secretion did mediate the development of PalB activity. PalB secretion via Type I system was fast with higher specific PalB activities but poor cell growth. On the other hand, the secretion via Type III system was slow with lower specific PalB activities but effective cell growth. Functional expression of lipase from Burkholderia sp. C20 (Lip) in various cellular compartments of Escherichia coli was explored. The poor expression in the cytoplasm was improved by several strategies, including coexpression of the cytoplasmic chaperone GroEL/ES, using a mutant E. coli host strain with an oxidative cytoplasm, and protein fusion technology. Fusing Lip with the N-terminal peptide tags of T7PK, DsbA, and DsbC was effective in boosting the solubility and biological activity. Non-fused Lip or Lip fusions heterologously expressed in the periplasm formed insoluble aggregates with a minimum activity. Biologically active and intact Lip was obtained upon the secretion into the extracellular medium using the native signal peptide and the expression performance was further improved by coexpression of the periplasmic chaperon Skp. The extracellular expression was even more effective when Lip was secreted as a Lip-HlyA fusion via the α-hemolysin transporter. Finally, Lip could be functionally displayed on the E. coli cell surface when fused with the carrier EstA.