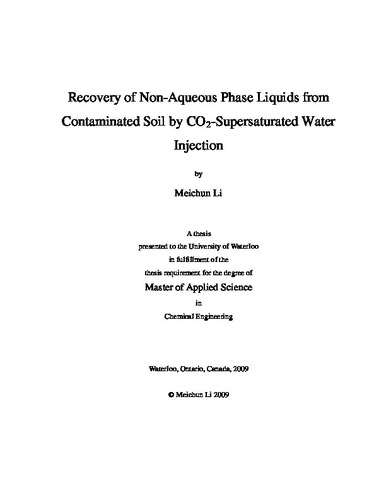 Supersaturated water injection (SWI) is a novel remediation technology which is able to remove entrapped residual NAPLs from saturated porous media by both volatilization (partitioning of volatile contaminants into the gas phase) and mobilization (displacement of isolated NAPL residuals by gas clusters). The character of gas saturation evolution in-situ in saturated porous media during SWI results in high sweep efficiency. This work focuses on studying the recovery of entrapped residual NAPL by the mobilization mechanism during SWI, thus low-volatility NAPL residuals, kerosene and a kerosene-hexadecane mixture, are used as contaminants. A series of SWI recovery experiments are conducted to investigate the influence of grain size, low-permeability layering, and physical properties of the contaminants on the recovery behavior. For columns contaminated with kerosene, the residual saturation can be reduced to around 4% from an initial value of 16%, and over 70% of the residual kerosene is recovered by a combination of mobilization and volatilization in homogeneous sand packs. For columns contaminated with a kerosene-hexadecane mixture, the final residual saturation is 7.4% and the final NAPL recovery is lower than that in kerosene columns. Grain size has little influence on NAPL recovery, but low permeability layering has a significantly negative influence. Experiments designed to compare SWI to sparging, and water-gas co-injection showed that water-gas co-injection was able to effectively recovery residual NAPLs albeit not as efficiently as SWI, while steady gas sparging is completely ineffective at recovering residual NAPL by mobilization. Based on these experimental observations, a conceptual model, involving double displacements and NAPL bank formation, is purposed to explain the experimental observations.