Exploring Methods for the Characterization of Viral RNA-protein Complexes 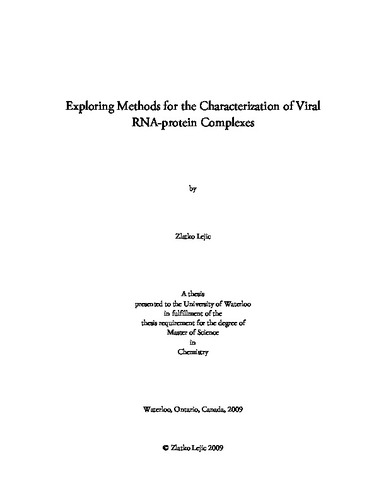 Flock House virus (FHV) is a (+) ssRNA virus that belongs to the Nodaviridae family. The viral genome is composed of two viral RNA’s: RNA 1 and RNA 2. Deletion and mutation studies in the N- and C-terminus of protein alpha have identified protein regions required for the packaging of FHV viral RNAs. Residues 2-31 on the N-terminus have been attributed with RNA2 recognition, while residues at positions 32-50 were required for the packaging of RNA1. The C-terminus is needed for packaging of both viral RNAs. The identified protein regions involved in packaging viral RNAs bind random cellular RNA with high affinity and standard methods of identifying RNA-protein interactions such as gel shift mobility assays will be unable to discriminate between specific and unspecific binding. Due to the difficulty in differentiating between specific and unspecific binding a new method for studying RNA-protein interactions was developed using a surface based detection approach. The surface based system monitors real-time binding, whereby specific and unspecific RNA-protein interactions will be distinguished through comparison of relative association rates for each binding interaction. A well studied RNA-protein interaction, the HIV-1 Rev-RRE, was used to develop the methodology for the surface based system. Human immunodeficiency virus type 1 (HIV-1) encodes a regulatory protein Rev that binds to HIV-1 mRNA of the Rev responsive element (RRE). Rev-RRE interaction regulates viral gene expression by controlling the export of spliced and unspliced mRNAs into the cytoplasm. The high-affinity and specificity of the Rev-RRE binding has been well characterized and was used as a model system to gauge the sensitivity of the surface based detection system, which can be further used to characterize various RNA-protein interactions. The surface based system uses diffractive optics to detect real time binding of molecules to receptors that are immobilized on a flat sensor surface. An avidin coated sensor surface was applied to couple the small biotinylated Rev peptide to the surface followed by binding its complementary RRE RNA. The binding interactions of the 30 nucleotide RRE to the immobilized 23 residue Rev peptide were successfully monitored using the avidin sensor. The Rev-RRE interaction was heavily influenced by the immobilization technique and steric hindrance at the sensor surface.