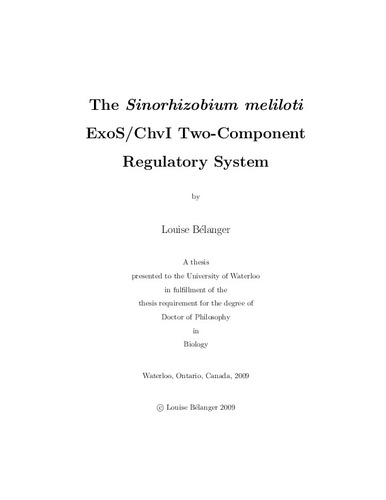 Exopolysaccharides are essential for the establishment of the symbiosis between Sinorhizobium meliloti and Medicago sativa (alfalfa). The ExoS/ChvI two-component regulatory system is known as a regulator of succinoglycan production but the genes that are directly regulated by ChvI have not been determined. Difficulty isolating exoS and chvI null mutants has prompted the suggestion that these genes are essential for S. meliloti viability. We have successfully isolated exoS and chvI null mutants using a merodiploid facilitated strategy. We present evidence that the S. meliloti ExoS/ChvI two-component regulatory system is essential for symbiosis with alfalfa. Phenotypic analyses of exoS and chvI null mutant strains demonstrate that ExoS/ChvI controls both succinoglycan and galactoglucan production and is required for growth on over 21 different carbon sources. These new findings suggest that the ExoS/ChvI regulatory targets might not be the exo genes that are specific for succinoglycan biosynthesis but rather genes that have common influence on both succinoglycan and galactoglucan production. To obtain further insight into the nature of the ChvI regulon, we obtained a purified His•Tag-ChvI and used it to perform modified electrophoretic mobility shift assays. These assays were done using genomic DNA and were followed by cloning of DNA fragments having the highest affinity for ChvI. Sequencing of these fragments revealed that ChvI has a diverse regulon, it affects transcription of genes encoding enzymes that are involved in different pathways. Transcriptional gene fusion assays confirmed that ChvI is important for the activation of the transcription of the msbA2 operon, as well as repression of the transcription of the rhizobactin 1021 operon and genes SMc00262-61. ChvI-regulation of genes that are part of the connected thiamine and histidine biosynthesis pathways suggest that ChvI could act in a concerted manner to avoid limitation of important intermediates in these pathways. This study presents for the first time genes directly regulated by ChvI and this includes none of the exo genes. This work opens new avenues in the understanding of the global regulatory role of the symbiotically important ExoS/ChvI two-component regulatory system.