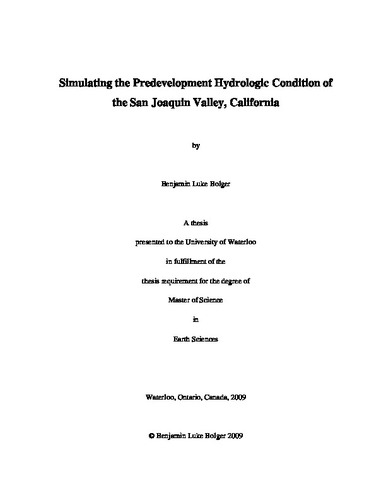 The San Joaquin Valley is part of the Great Central Valley of California, a major agricultural centre and food supplier for the United States. This area has significant water management concerns given the very high water demand for an increasing state population and for intense irrigation in a hot, temperate to semi-arid climate where the overall rate of evapotranspiration (ET) is high, and the overall rate of precipitation is low. Irrigation heavily relies upon groundwater and surface water extractions. Through the historical and current concerns of regional water resources reliability, land surface subsidence, water quality issues, and the health of ecosystems, a need for regional-scale water resource management and planning has developed. The physically-based surface-subsurface HydroGeoSphere (HGS) model is used to examine the regional-scale hydrologic budget of a large portion of the San Joaquin Valley. The objective of this investigation is to develop a steady-state groundwater-surface water model of the San Joaquin Valley representative of predevelopment hydrologic conditions. The groundwater-surface water system has undergone drastic changes since the employment of groundwater and surface water extractions for irrigation and mining, and is still responding to past and present stresses. The only certain stable initial condition must therefore be that of the natural system. The model input parameters were constrained by all relevant available hydrologic data. The model was not calibrated to subsurface hydraulic heads or river flows. However, the model does provide a fair match between simulated and actual estimated water table elevations. Historic river flow estimates were not used to calibrate the model, because data consistent with that collected by Hall (1886) and representative of the natural system were not available. For this investigation, water enters through precipitation and the inflow of major rivers only. The subsurface domain is bounded by no-flow boundaries, and groundwater is therefore only able to exit the subsurface through discharge to surface water features or through ET. Surface water is only able to exit the model through discharge via the San Joaquin River and through ET. Average river inflows circa 1878 to 1884 documented by Hall (1886) were applied where the rivers enter into the valley. The spatially variable average rate of precipitation (years 1971 to 2000) from a PRISM dataset was applied to the top of the model. The spatially variable long term average potential ET rates from the California Department of Water Resources (DWR) et al. (1999) were applied to the top of the model. Averaged overland flow parameters and vegetation factors needed to calculate actual ET were specified at the top of the model based on literature values and the 1874 spatial distribution of natural vegetation provided by California State University at Chico et al. (2003). Hydrogeological data including hydraulic conductivities, porosities, specific storage, and unsaturated zone properties are based on literature values from other relevant studies. The resulting steady state model is therefore characterized by historical long term average data assumed to be representative (as close as possible) of the flow system circa 1848. Results indicate that the natural hydrologic setting of the San Joaquin Valley is a complex one. Complex hydrologic processes, including significant groundwater-surface water interaction along the major rivers and within wetland areas formed by flooded surface water, as well as ET and impacted root zone processes were identified in the model domain. Identification and simulation of the complex recharge and discharge relationships in the model domain sheds insight into the hydrologic nature of some historic natural wetlands. Evapotranspiration is a very significant sink of both surface water and groundwater (44.8 % of the water balance input), and has a major impact on hydrologic processes in the root zone. The presence and path of the major rivers in the domain are well defined in the model output and agree well with their actual locations. The model simulates gaining and losing reaches of the major rivers, replicating the historic recharge-discharge relationship documented by others. The general location, formation, and hydrologic processes of some significant wetlands simulated by the model have a fair agreement with historical records. As mentioned above, there is also a fair match between simulated and actual estimated water table elevations. Successful simulation of the complex hydrologic processes and features that characterize the predevelopment hydrologic conditions of the San Joaquin Valley and that resolve the water balance of the natural system underscores the importance and necessity of using an integrated model. This steady state model should serve as a reasonable initial condition for future transient runs that bring the model up to current hydrologic conditions capable of estimating present and future water budgets.