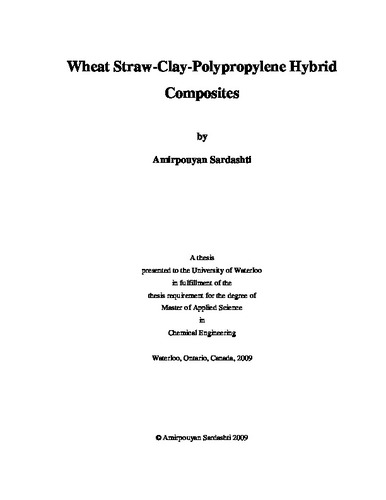 The preparation of polymeric hybrid composite consisting of organic and inorganic fillers is of interest for industries like automotive, construction and packaging. In order to understand and predict the physical and chemical properties of these hybrid composites, it is necessary to fully understand the nature and properties of the employed fillers. In this study, the preparation of polypropylene hybrid composite consisting of wheat straw and clay was investigated. A detailed study was performed on wheat straw from South Western Ontario region. The effect of grinding the straw and compounding it with polypropylene was investigated. Experiments were carried out to identify the thermal stability of the ground wheat straw with respect to their size and composition. It was important to identify a correlation between these properties in order to minimize the straw degradation by processing and also to improve the final properties of the hybrid composite. The composite samples were prepared through melt blending method using a co-rotating twin-screw extruder. Sample test bars were prepared by injection moulding. The composition of the constituents of the hybrid composite; percentages of wheat straw, clay and coupling agent, were varied in order to investigate their influence on thermal stability, water resistance and mechanical properties. The results of the study indicated that grinding the wheat straw with a hammer mill produced particles with different sizes and shapes. It was found that through the grinding system all particles, regardless of their size, had a multi-layered structure similar to the plant structure. Further hammer milling did not produce plant particles with long aspect ratios that would be expected in a defibrillation process. Analysis of the chemical composition of wheat straw particles of different sizes and shapes was used to measure the ratio of hemicelluloses: lignin and the ash content. It was found that the large particles contained more amount of lignin whereas smaller particles had larger amount of ash content. The thermal stability of the particles was found to be a function of particle size rather than the lignin content. Particle size analysis on the wheat straw particles after the extrusion process indicated a reduction in the particle length and aspect ratio. The thermal stability of the composites was found to be enhanced by the addition of clay particles at higher temperature and the addition of coupling agent at lower temperatures. Increasing the amount of wheat straw and clay content increased the flexural modulus and reduced the resistance for water absorption. Increasing the amount of coupling agent also increased the flexural modulus and resistance for water absorption. The morphological study by scanning electron microscopy revealed that coupling agent increased the interfacial interaction between the particles and the polymer matrix.