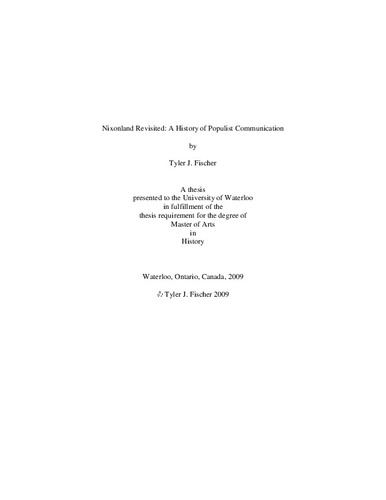 The goal of this thesis was to validate journalist Rick Perlstein’s assertion in Nixonland: The Rise of a President and the Fracturing of America (2008) that the foundational dialectic of the 1960s “has not yet ended.” With Nixon as the principal cultural architect of modern American political discourse, Perlstein defined Nixonland as “the America where two separate and irreconcilable sets of apocalyptic fears coexist in the minds of two separate and irreconcilable groups of Americans.” Perlstein’s grand narrative for the inherited socio-political landscape of the 1960s has conceptually synthesized the nature of the “culture wars” of the 1960s based on Nixon’s imposed hegemonic framework for political discourse through the theatre of television. The central argument of this thesis is shaped by the dialogue in the historiography in that Richard Nixon and Barack Obama appear to be “bookend presidents” of the limits of the modern American kulturkampf- the ongoing conflict between religious and secular elements in American society. While Nixon confined political discourse within the hegemonic framework of the images and rhetoric of modern American conservatism imbibed in the 1960s, Obama expanded the limits of political discourse through the motives and motifs of New Left rationalism established in the 1960s. Within this interpretative framework, this thesis illustrates the foundational dynamic of campaigning and governance within modern American political discourse by demonstrating how presidential elections are structured according to the Republican style of conservative “populist aggression” against the liberal Democratic substance of “fairness issues.”