Effects of Metal Cations and Cyclodextrins on 1,3 Diphenyltriazenes Isomerization and Decomposition 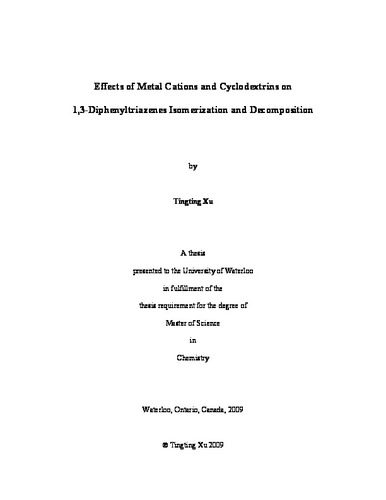 Triazenes are molecules characterized by having the triazeno group (–N=N–N<). They are known as photoactive molecules due to trans-cis photoinduced isomerization around the N=N bond. Their nucleophilic character makes them good ligands to metal centers. A study on the potential ability of photochromic organic ligand triazenes to undergo reversible cis-trans photoisomerization and, in turn, photoreversible complexation with metal cations was carried out in aqueous solutions. Metal-triazenide complexes are instantaneously formed upon addition of metal cations to trans-triazenes dissolved in aqueous solutions. For silver-triazenide and mercury-triazenide complexes, the metal-to-ligand ratios are 1:1 and 1:2, respectively. Unfortunately, target metal-triazenide complexes do not photoisomerize upon 355 nm laser excitation. Triazenes are also known to be unstable materials under acidic conditions. A study on the effects of cyclodextrins (CDs) on the rate of acid-catalyzed decomposition of 1,3-diphenyl-triazenes was carried out in 2% MeOH aqueous buffer solutions by means of spectroscopic methods. CDs inhibit triazenes decomposition through inclusion complex formation. The inclusion complexes render the guest triazene significantly less basic as a consequence of the less polar nature of the CD cavity (a microsolvent effect). For any given triazene, the inhibition effect is dependent on both the size of the cyclodextrin cavity and the substituents on the cavity rims. Binding constants for 1:1 host:guest complexes increase in the order α-CD < ß-CD ~ TM-ß-CD < HP-ß-CD; in the case of α CD, formation of 2:1 complexes is also observed.