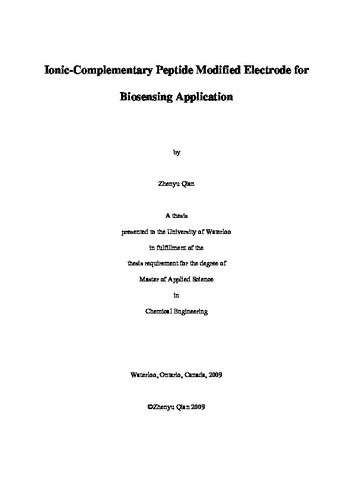 Self-assembling peptides have emerged as new nanobiomaterials and received considerable attention in the areas of nanoscience and biomedical engineering. One important type is the ionic-complementary peptide, which contains special patterns of positive and negative charge distribution. This thesis explores the application of this special type of peptides for the modification of electrode surfaces. The ionic-complementary peptide modified electrode was then further used to immobilize biologically active molecules, glucose oxidase in the present case, to construct a biosensor. There are two major parts in this thesis. In the first part, an ionic-complementary peptide, EFK16-II, was used to modify a highly ordered pyrolytic graphite (HOPG) electrode surface. The nanofibre structure of the self-assembling peptide on the electrode surface was characterized by atomic force microscopy (AFM). Attenuated total reflection fourier transform infrared sectroscopy (ATR-FTIR) spectra showed that upon addition of 1-ethyl-3-(3-dimethylaminopropyl) carbodiimide (EDC), EFK16-II molecules tend to be cross-linked among themselves. Cross-linking of the peptide diminishes the number of carboxyl groups available for immobilizing a sensing enzyme, i.e., glucose oxidase (GOx). A simple method based on pre-mixing the carbodiimide and GOx was developed; it inhibited peptide cross-linking and significantly improved enzyme immobilization. Biosensors constructed in this way showed increased overall signal intensity and a much higher sensitivity at 4.94mA M-1 cm-2, a six-fold increase compared to the previously-reported peptide-modified electrodes. In the second part, another ionic-complementary peptide, EAK16-II, was used to modify the HOPG electrode. AFM images showed that EAK16-II formed well-ordered nanofibre patterns on the electrode surface. The redox couple Fe(CN)63-/4- was used as a probe to detect the electrochemical properties of the EAK16-II modified electrode. The results showed that the electron transfer at the electrode surface does not change much before and after modification. GOx was immobilized onto the EAK16-II modified HOPG and showed a good response to the concentration change of glucose. Similar to the EFK16-II, inter- or intro-peptide cross-linking also occurs when the solution containing EDC and sulfo-NHS was injected onto EAK16-II modified electrode. The same method as in the first part was applied here to prevent peptide cross-linking. The sensitivity was improved from 0.53mA M-1cm-2 to 2.4mA M-1cm-2. A proposal for constructing a reagentless biosensor by immobilizing both enzyme and mediator onto the electrode was made. However, the results indicated that the mediator, ferrocene carboxylic acid (FCA), was not stable on the surface after being immobilized. A redox protein, cytochrome c (Cyt c), was also immobilized onto an EAK16-II modified electrode. Direct electron transfer (DET) between the redox center of Cyt c and the electrode was observed. However, cyclic voltammetry results indicated that the peptide did not help improve the DET of modified Cyt c. The results presented here demonstrate significant potential for ionic-complementary peptides for constructing electrochemical biosensors.