36 Stratagems Towards a People's Modernity 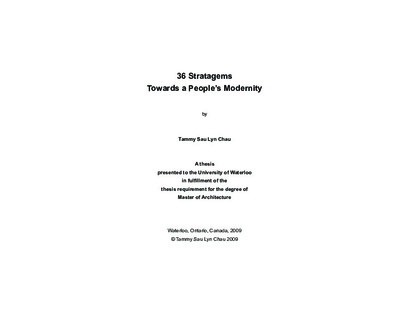 The design thesis is sited along the Shanghai Bund in China. It pursues an alternative modernity that is quintessentially Chinese by developing a design approach specific to the local imperatives and the contextual condition. The argument is set upon the premise of an accommodative nature of Chinese modernity towards foreign influences since the 1850’s. The Bund, being the original site of Chinese modernity, is characterized by hybrid structures that combine the local and the foreign. Imported building materials, techniques, and proportional ideals have predominately influenced the architecture. Against this backdrop, the thesis problematizes Shanghai’s building practice that pertains to the adoption of foreign forms. Is it possible to create an alternative modernity that is quintessentially Chinese? The thesis first examines the development of the city’s modernity, traditional construction principles, and narratives inherent to the site. Program components are then reorganized for tactical design applications. It concludes with a time-based and event-driven collective space that seeds participation towards a local modernity.