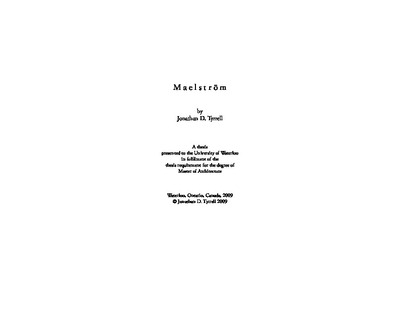 The Lofoten Maelström in Norway, one of the world’s most powerful systems of tidal eddies, has been a locus of terror and imagination for centuries. First depicted in renaissance cartography, the myth of the vortex was propagated through the occult science of Athanasius Kircher and found its most current expression in Edgar Allan Poe’s “A Descent into the Maelström”. This thesis is a work of exegesis. That is, a work of interpretation that leads out of a text, or a site, towards another level of meaning. Poe’s text refers to the geographic site of the thesis but also becomes a site in itself. It is out of this text/site that the author unfolds a series of exegetical pathways, constructing an ambiguous ground between the real and imaginary dimensions of the Maelström. This thesis is also a work of synthesis. It explores how the speculative architectural proposition can crystallize subtle conceptual material in ways that text and image alone cannot. While the thesis is heavily invested in various modes of representation, architectural and otherwise, it also acts as a critical investigation into the nature of representation itself. The document is composed as a performance in three parts. Each part broadly engages a fundamental binary that is latent in the work of architecture: 1) history and fiction 2) figure and ground 3) ritual and design. Part I introduces the site through various historical and fictional portrayals of the Maelström which have contributed to the co-authorship of its mythologized identity. Part II consists of a suite of three discursive essays that address the sublime, the death instinct, romanticism, negative theology, the chora, and 20th century performance theory. This material is organized under the umbrella of three figure/ground conditions: the figure against the sublime ground of the romantic-era painting, the negative ground of medieval mysticism, and the ritual ground of the Greek chorus and its spatial counterpart, the chora. Finally, Part III includes two movements: the design of a wave energy research facility, and a series of episodic vignettes that subvert the intentions of the designer by re-casting the facility as a place of ritual. With the Maelström as a backdrop, the architectural proposition offers itself as the stage upon which this struggle between design and ritual is enacted.