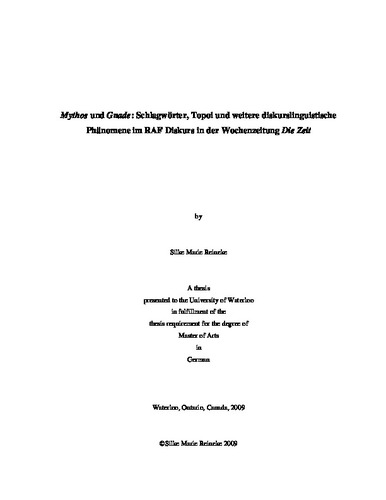 The terrorist group Rote Armee Fraktion (RAF) and its place in post-war German history have been an important topic and therefore featured in public discourses of the Federal Republic of Germany between 1970 and 2008. The question whether this complex discourse and the underlying political and social views have changed significantly over the past four decades is addressed in this thesis. Considering the dialectic relationship of discourse and society, a qualitative and quantitative discourse-linguistic study of a corpus of newspaper articles of this time period is conducted. The online archive of the German weekly newspaper Die Zeit was selected as a source to establish the text corpus for this study. The analysis follows the methodology of the Düsseldorfer discourse-linguistic research and is informed by the general approach of Critical Discourse Analysis. After a brief discussion of the role of language in the construction of social reality, the relevant scholarly literature is reviewed and an overview of the major historical events in the context of the RAF is provided. The two theoretical discourse-linguistic approaches are discussed in some detail to derive the units of analysis and the necessary categories for the textual analysis in this project. These categories are then operationalized for this study. The focus lies on categories such as lexical choice, metaphors, semantic fields, argumentation patterns, and meta-linguistic comments. A pilot study was conducted to determine the scope of the representative corpus and to establish a set of concrete categories. Two complex topics for a detailed analysis were chosen: Mythos (myth) and Gnade (mercy, pardon, leniency). The analysis of a ‘Mythos RAF’ showed that the meaning of this phrase is highly polysemous in the whole period that was analyzed. It is interpreted as a Schlagwort as a means to evoke several semantic meanings. The field of Gnade is analyzed mainly for Argumentationstopoi (argumentation structures) that have been used in discussing whether or not former RAF terrorists should be released from prison. The analysis showed that there has been a certain change in the way the topic was publicly discussed, but it was not significant enough to infer a change in society’s view towards the topic. On the contrary, one could argue on the basis of this analysis that many of the biased views in German society remained stable.