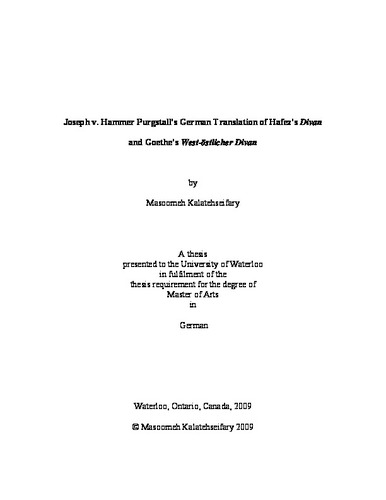 Johann Wolfgang von Goethe’s West-östlicher Divan [West-Eastern Divan], which emerged from the author’s interest in love poems of the fourteenth-century classical Persian poet Hafez, was the inspiration for this thesis. The overwhelmingly negative appraisal of the first translation of Hafez’s entire Divan into German by Joseph Freiherr von Hammer Purgstall, which was used by Goethe in the composition of his own poems, sparked its research questions: How can the errors in Joseph von Hammer Purgstall’s translation of Hafez’s Divan be explained, and how did these inconsistencies affect Goethe’s understanding of Hafez’s poems? Despite contention about the accuracy of Hammer’s version of Hafez, the translation inspired Goethe, who, feeling so much affinity for Hafez as to call him his ‘twin brother’, soon began to write poetry imitating Hafez’s style in the process of cultivating his growing fascination for this classical Persian love poetry. The thesis draws connections between the Hafezian elements of the original Divan and their reproduction in Goethe’s cycle of poems by analyzing a selection of poems from Hammer’s translation, considering Hammer’s role as mediator, as well as comparing with these a selection of Hafez-inspired poems from Goethe’s West-östlicher Divan. To this end, chapter one sets Hafez into the historical and artistic context of Persian poetry and introduces the formal aspects of Hafez’s primary lyrical form, the ghazal. In this it focuses especially on technical aspects of rhyme and complicating elements such as the formal consideration of unity and the contextual consideration of mystical allusions. Further, this chapter familiarizes the reader with essential features of the linguistic and rhetorical peculiarities and traditions of the Persian language, as well as the dramatis personae of Hafez’s Divan. The analysis of Hammer’s translations in the second chapter demonstrates both his successful renderings as well as his occasional deviations from the original, while addressing the difficulties he faced in transferring the linguistic peculiarities of the original to the target language. It also reviews the extent to which Hafez’s philosophy remained intact in his version. The third chapter focuses on the poems of Goethe’s West-östlicher Divan in light of both Hammer’s translation and Hafez’s original. Taking about thirty poems into account, this chapter shows that Goethe’s mastery in composing Hafez-inspired poems gives the reading audience an understanding of the poetry of that classical Persian figure without needing to read or understand the original text and it argues that the poems of his West-östlicher Divan enliven Hafezian literary patterns in the minds of readers who know the Persian poet and make them understandable for the uninitiated westerner. The analysis further elucidates how Goethe overcame the weaknesses in Hammer’s version to reconstruct the fundamentals of Hafez’s message.