Dystopian Present and Future: The Temporal Orientation of Evgenii Zamiatin’s We and Andrei Platonov’s The Foundation Pit 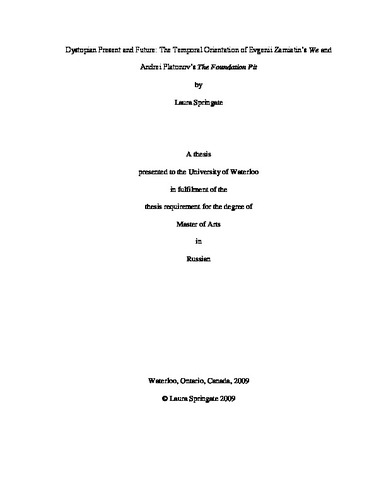 A recent genre study by Erika Gottlieb (2001) divides dystopian literature into two temporal categories, which she calls West and East. Within this framework, Gottlieb places Evgenii Zamiatin’s We (1921) within her Western framework comprised of authors primarily concerned with envisaging future totalitarian societies. Conversely, she places Andrei Platonov’s The Foundation Pit (1930) within her Eastern framework of authors concerned with providing descriptive works of those totalitarian societies come to pass in the present. It is with these classifications that this thesis takes issue. It is my contention that in We Zamiatin was actually centrally concerned with providing a description and critical account of both the volatile, repressive socialist system of contemporary Leninist Russia and the claim that post-revolutionary Russia now inhabited a post-historical epoch. I further argue that in The Foundation Pit Platonov was as concerned with questions of the future as he was with the society of the present: in his implied criticism of Stalin’s Five-Year Plans, he engages not merely with the political policies of a particular moment in time, but with the larger view of how the present relates to the future which underlies them.