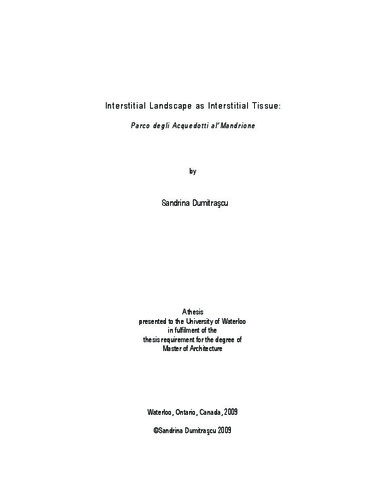 This thesis emerged from a series of journeys / ‘percorsi’, conducted between 2007 and 2009 along the course of the aqueducts and railway lines in the south-east of Rome. During this time, my focus shifted from figure to background, from the archaeological fragments to the territorial and urban contexts encountered along their passage. This zone offers a unique cross sectional experience of the city, spanning for approximately seven kilometers - from the Aqueduct Park (Parco degli Acquedotti) at the outer edges of the city to the Aurelian Walls at Porta Maggiore – exposing a variety of conditions ranging from the openness of Roman Campagna to the dense agglomeration of Rome’s urban periphery. This is a place of contrasts, of industrial and archaeological, in a state of abandonment and in a constant state of flux. It is as difficult to grasp conceptually as it is to traverse physically, lacking territorial continuity, legibility and ease of access. It is physically fragmented and separated from the rest of the city by infrastructural arteries and property boundaries. This thesis proposes reversing the marginal aspect of this area by re-establishing its relationship with its urban context. It suggests a reading of this landscape as ‘interstitial tissue’ a connective element rather than an inert zone of separation. Using the biological connotation of the interstitial (“the fine connective tissue lying between the cells of other tissue”) - the thesis focuses on the relational potential of this in-between zone, its ability to connect rather than separate places and neighbourhoods along it. It proposes identifying spatial continuities as well as establishing temporal connections between the past, present, and future of this area. The thesis further proposes a design intervention along a site situated between the aqueducts and via del Mandrione, a historical road running in parallel to the railway lines. Although this site is currently enclosed and separated from its context by property boundaries, the thesis proposes reconfiguring this site as a threshold, a point of intensity between the city and its margins.