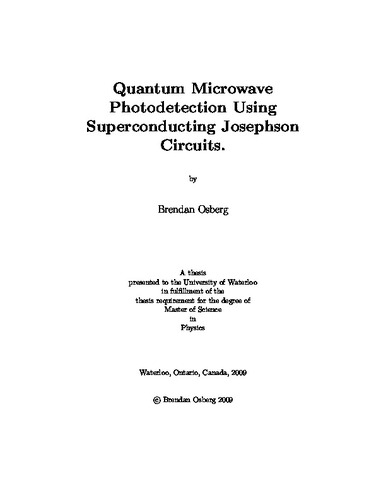 Superconducting circuits have recently become a major contender for the implementation of quantum computers owing to their compatibility with existing microchip fabrication technologies. Their utility stems largely from their ability to be coupled with resonant cavities for the purposes of trapping and relaying microwave radiation. Because of this feature, scientists are able to transmit quantum information from a variety of qubits. Though quantum-limited amplifiers exist, unfortunately there currently exists no microwave photon counter capable of single shot quantum detection. Hence, we use superconducting circuits with Josephson junctions to design a microwave photon detector based on a modified phase qubit that exhibits a bandwidth of 4GHz, and a detection fidelity of 98%. We use metastable barrier transition (driven by incident photons) to create an avalanche effect analogous to current photo-diodes. Linear coupling of the junction flux with the radiation permits photodetection from an arbitrary quantum source in the GHz range. We show the device to be robust to changes in drive frequency, temporal photon width, and resonator quality factor, and we optimize our device with respect to these parameters. We show the device to be stable over the necessary time scales, and yet sensitive enough to accurately measure photons on demand.