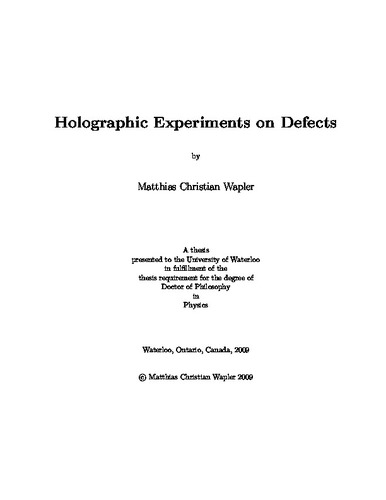 Using the AdS/CFT correspondence, we study the anisotropic transport properties of both supersymmetric and non-supersymmetric matter fields on (2+1)-dimensional defects coupled to a (3+1)-dimensional N=4 SYM "heat bath". We address on the one hand the purely conformal defect where the only non-vanishing background field that we turn on is a "topological", parameter parametrizing the impact on the bulk. On the other hand we also address the case of a finite external background magnetic field, finite net charge density and finite mass. We find in the purely conformal limit that the system possesses a conduction threshold given by the wave number of the perturbation and that the charge transport arises from a quasiparticle spectrum which is consistent with an intuitive picture where the defect acquires a finite width in the direction of the SYM bulk. We also examine finite-coupling modifications arising from higher derivative interactions in the probe brane action. In the case of finite density, mass and magnetic field, our results generalize the conformal case. We discover at high frequencies a spectrum of quasiparticle resonances due to the magnetic field and finite density and at small frequencies a Drude-like expansion around the DC limit. Both of these regimes display many generic features and some features that we attribute to strong coupling, such as a minimum DC conductivity and an unusual behavior of the "cyclotron" and plasmon frequencies, which become correlated to the resonances found in the conformal case. We further study the hydrodynamic regime and the relaxation properties, in which the system displays a set of different possible transitions to the collisionless regime. The mass dependence can be cast in two regimes: a generic relativistic behavior dominated by the UV and a non-linear hydrodynamic behavior dominated by the IR. In the massless case, we also extend earlier results to find an interesting duality under the transformation of the conductivity and the exchange of density and magnetic field. Furthermore, we look at the thermodynamics and the phase diagram, which reproduces general features found earlier in 3+1 dimensional systems and demonstrates stability in the relevant phase.