Memory across trials in visual search 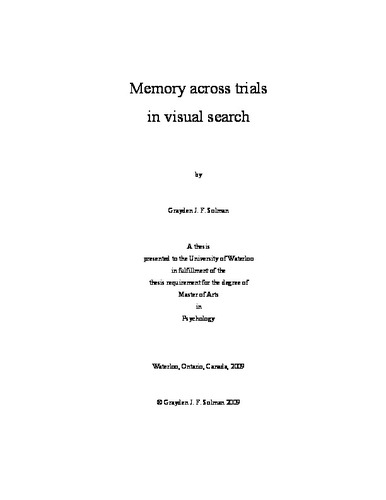 In two experiments we evaluated whether memory for item locations across trials can improve visual search performance. Measuring both response times and eye movements we examined how visual search performance is influenced by a progressive change in item locations across successive search trials. The positions of items in the search displays were slightly shifted across successive displays and the degree of shift (trial-to-trial stability) was varied across participants. In addition, at the beginning of a trial we either presented only the current target (no-preview) or current and the next target (preview). This allowed us to evaluate performance under preview and under load, as participants on some trials held a future target in working memory. We found that search performance improved with increased stability. In addition, we demonstrate direct links between the accuracy with which an item is observed on one trial and the facility of search for that item during later trials, implicating a strong influence of trial-to-trial memory. Finally, we found that previewing a target improved performance particularly under load. Overall, our results support a model of search in which relatively slow top-down information guides and constrains the deployment of fast perceptual processes.