To Heal the Nation: the Creation of President Ford's Clemency Program 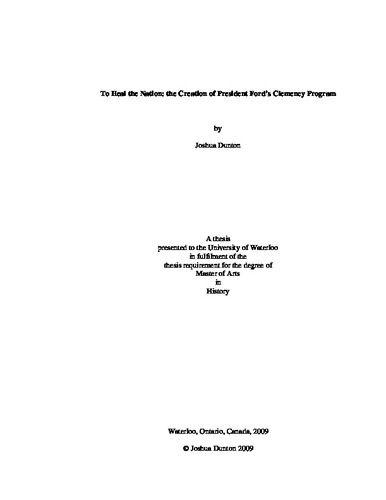 The war in Vietnam divided America into two groups, those who supported the war and those who opposed. At wars end, the divisions did not disappear. Instead, the nation was split on the question of amnesty for draft and military offenders who avoided service during the war. Gerald R. Ford, upon his ascendancy to the presidency, was left with the monumental task of resolving the fate of draft and military offenders and ushering in an era of unification and reconciliation by answering the amnesty question. This study examines the factors surrounding President Ford’s decision to extend clemency to draft and military offenders of the Vietnam era. President Ford was faced with the need to heal the nation, but confined by the possibility of exacerbating the divisions within America regarding amnesty. In deciding to extend clemency, Ford was influenced by draft and military offenders themselves, the debate on amnesty, including its coverage in news media and the symbolic nature of the debate, public opinion and Ford’s personal and political influences. These influences led Ford towards a middle path in his attempt to resolve the issue of amnesty. Ford’s clemency program offered conditional amnesty, a concept supported by the majority of Americans, to draft and military offenders in order to provide them with an opportunity to return and contribute to the rebuilding of America in the post-Vietnam era and begin the healing process by trying to appease all considering the amnesty question.