Land Use Change and Economic Opportunity in Amazonia: An Agent-based Model 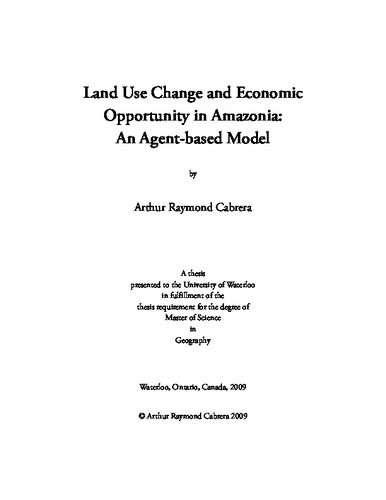 Economic changes such as rising açaí prices and the availability of off-farm employment are transforming the landscape of the Amazonian várzea, subject to decision-making at the farming household level. Land use change results from complex human-environment interactions which can be addressed by an agent-based model. An agent-based model is a simulation model composed of autonomous interacting entities known as agents, built from the bottom-up. Coupled with cellular automata, which forms the agents’ environment, agent-based models are becoming an important tool of land use science, complementing traditional methods of induction and deduction. The decision-making methods employed by agent-based models in recent years have included optimization, imitation, heuristics, classifier systems and genetic algorithms, among others, but multiple methods have rarely been comparatively analyzed. A modular agent-based model is designed to allow the researcher to substitute alternative decision-making methods. For a smallholder farming community in Marajó Island near Ponta de Pedras, Pará, Brazil, 21 households are simulated over a 40-year period. In three major scenarios of increasing complexity, these households first face an environment where goods sell at a constant price throughout the simulated period and there are no outside employment opportunities. This is followed by a scenario of variable prices based on empirical data. The third scenario combines variable prices with limited employment opportunities, creating multi-sited households as members emigrate. In each scenario, populations of optimizing agents and heuristic agents are analyzed in parallel. While optimizing agents allocate land cells to maximize revenue using linear programming, fast and frugal heuristic agents use decision trees to quickly pare down feasible solutions and probabilistically select between alternatives weighted by expected revenue. Using distributed computing, the model is run through several parameter sweeps and results are recorded to a cenral database. Land use trajectories and sensitivity analyses highlight the relative biases of each decision-making method and illustrate cases where alternative methods lead to significantly divergent outcomes. A hybrid approach is recommended, employing alternative decision-making methods in parallel to illustrate inefficiencies exogenous and endogenous to the decision-maker, or allowing agents to select among multiple methods to mitigate bias and best represent their real-world analogues.