Pragmatism and Cooperation: Canadian-American Defence Activities in the Arctic, 1945-1951 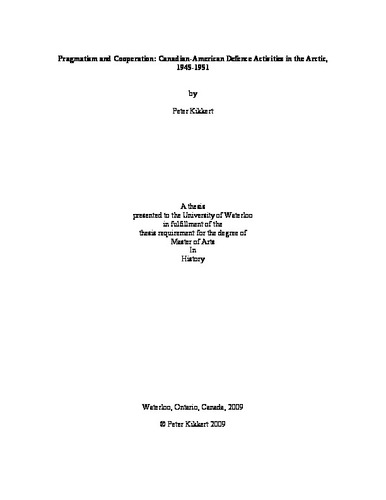 During the early Cold War, as the Soviet menace placed Canada in between two hostile superpowers, the Canadian government decided to take steps to ensure that its sovereignty and national interests were not threatened by the Americans in the new strategic environment. This study examines the extent to which the Canadian government actually defended its sovereignty and rights against American intrusions in the early Cold War. At its core is an examination of the government’s policy of gradual acquisition in the Arctic between 1945 and 1951. This thesis explores the relationships that existed at the time, the essence of the negotiations, the state of international law and the potential costs and benefits of certain Canadian courses of action. It also explains how Canada’s quiet diplomacy allowed it to avoid alienating its chief ally, contribute to continental defence, and strengthen its sovereignty during this period.