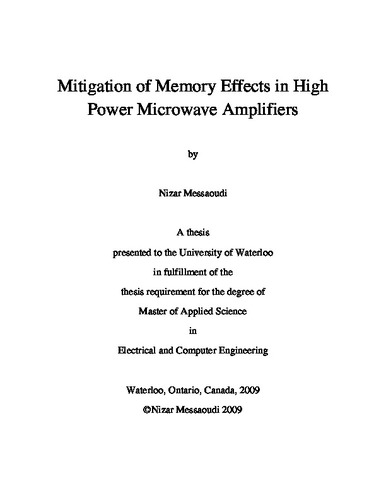 This thesis expounds on the application of Doherty Power Amplifiers (DPA) along with baseband Digital PreDistortion (DPD) techniques to tackle the antagonistic demands of high power efficiency and linearity imposed by modern communications. Memoryless modeling is firstly introduced and its limitations when dealing with PAs driven with realistic devices. Therefore, electrical memory effects are explored in greater detail and a mathematical model showing the relation between the various harmonic components in the output and how they can re-mix back into the fundamental band is developed. The importance of the output bias network in the reduction of memory effects is highlighted. A memory polynomial (MP) based DPD is shown to be a good solution for the linearization of wideband DPA which exhibit strong memory effects. To further improve this solution, the complexity of the MP-DPD is reduced. For that, the even-order terms in the MP branches were first removed. Then, the PA memory effects theory was used to further reduce the number of coefficients of the MP-DPD by decreasing the nonlinearity orders in the different branches individually. These two steps allowed for a reduction of the number of coefficients to almost one-third and the conditioning number by three orders of magnitude while maintaining the same linearization capability. This substantially alleviates the requirements on the digital signal processors and the time needed to construct and implement the MP-DPD in real environment. Experimental validation carried out using a 400 Watt DPA, driven with 4-Carrier WCDMA signal, showed excellent linearization capability by achieving an ACPR of better than 50 dBc with a power efficiency of better than 42.4%. Despite this, the depth of the memory effects in the DPA was still significant. While an effort was made to reduce further the memory effects, the discrepancy between the simulated behavior of the DPA and that observed in simulation was significant. In an attempt to rule out the DPA structure as the cause of the discrepancy between the measured results and the behavior predicted in simulation, a single branch class AB PA was designed using the transistor model. The PA behavior was well predicted when driven with a Continuous Wave (CW) signal, however the simulated and measured behavior differed greatly when the PA was driven by a two tone signal. This rendered the desired reduction of the memory effects impossible at the design stage.