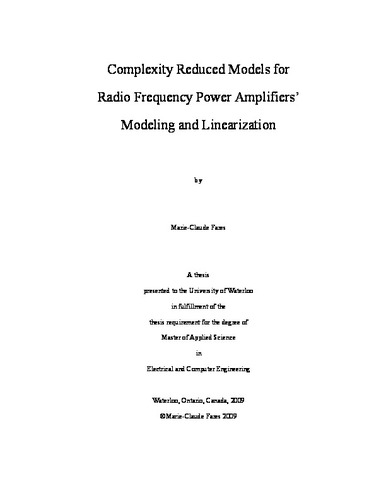 Radio frequency (RF) communications are limited to a number of frequency bands scattered over the radio spectrum. Applications over such bands increasingly require more versatile, data extensive wireless communications that leads to the necessity of high bandwidth efficient interfaces, operating over wideband frequency ranges. Whether for a base station or mobile device, the regulations and adequate transmission of such schemes place stringent requirements on the design of transmitter front-ends. Increasingly strenuous and challenging hardware design criteria are to be met, especially so in the design of power amplifiers (PA), the bottle neck of the transmitter’s design tradeoff between linearity and power efficiency. The power amplifier exhibits a nonideal behavior, characterized by both nonlinearity and memory effects, heavily affecting that tradeoff, and therefore requiring an effective linearization technique, namely Digital Predistortion (DPD). The effectiveness of the DPD is highly dependent on the modeling scheme used to compensate for the PA’s nonideal behavior. In fact, its viability is determined by the scheme’s accuracy and implementation complexity. Generic behavioral models for nonlinear systems with memory have been used, considering the PA as a black box, and requiring RF designers to perform extensive testing to determine the minimal complexity structure that achieves satisfactory results. This thesis first proposes a direct systematic approach based on the parallel Hammerstein structure to determine the exact number of coefficients needed in a DPD. Then a physical explanation of memory effects is detailed, which leads to a close-form expression for the characteristic behavior of the PA entirely based on circuit properties. The physical expression is implemented and tested as a modeling scheme. Moreover, a link between this formulation and the proven behavioral models is explored, namely the Volterra series and Memory Polynomial. The formulation shows the correlation between parameters of generic behavioral modeling schemes when applied to RF PAs and demonstrates redundancy based on the physical existence or absence of modeling terms, detailed for the proven Memory polynomial modeling and linearization scheme.