Functional analysis of concealment: a novel application of prospect and refuge theory 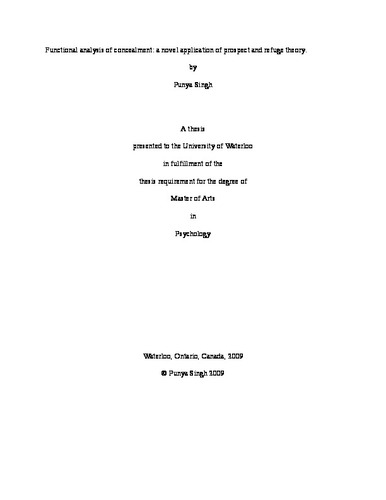 According to prospect-refuge theory, humans prefer to be in spaces that afford protection from threat (refuge), but also provide large fields of view (prospect). These preferences are said to arise from the adaptive advantages of such locations with respect to both avoidance of predation from refuge and survey of opportunities for resource collection by prospect. Prospect-refuge theory in the past has traditionally only been applied to human beings, but many of the same contingencies governing spatial preference ought to also hold true in other animals. If people's spatial preferences are influenced by prospect-refuge considerations, then such preferences ought to be found in other animals that are subject to the same pressures to find safety and resources. The overall objective of this study was to explore spatial preferences of the Mongolian gerbil in situations in which prospect-refuge theory makes specific predictions about which regions of an environment will be preferred. Gerbils were placed in an arena containing three dome shaped refuges that varied in the amount of prospect and refuge. A predator was released during the trial to examine how contextual factors may influence the degree of prospect and refuge preferred. There was a preference for an enclosed refuge at stimulus onset even though this was not reflective of what happened prior to stimulus onset, which suggests there was a shift in preferring refuges with greater concealment upon exposure to a threatening stimulus. These results indicate that shelter preference does in fact depend on contextual factors. An explicit comparison of these preferences in widely divergent species may help to place theories of spatial preference on a firmer biological footing, and may provide a greater understanding of how the principles of spatial cognition might underpin parts of the design process.