Radial Movement of a Passively Released Gas from a Monitoring Well 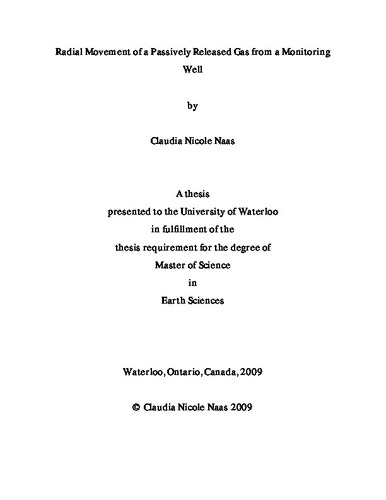 In order to preserve groundwater as a viable source of drinking water, remedial measures must be applied where appropriate. The application of the various remedial technologies is site and contaminant dependent. Differing geology, subsurface soil, groundwater geochemistry, type of contaminant present, cost and even accessibility to the site are all considerations when selecting an appropriate remedial system. At many sites oxygen is a limiting factor for aerobic degradation of many organic compounds like methyl tert butyl ether (MTBE) and hydrocarbons found in diesel and fuel oil, etc. (Nyer et al, 2002). Mechanisms limiting the success of getting the oxygen out of the passive release well include: · Slow chemical diffusion of oxygen in water; · Limited cross section of the groundwater flowing into the well and advecting oxygenated water back into the aquifer; and · Generally weak transverse dispersion, both horizontal and vertical, during subsequent advection of the oxygenated water in the porous media. These issues must be recognized even in the design of a passive release well remediation system. For example, a typical remedial objective is to deliver dissolved oxygen across the width and vertical extent of a contaminant zone in an aquifer. The width of the oxygen plume around the injection well defines how many oxygen-release wells are required to create a curtain of oxygen. Cost-effective design dictates fewer wells, while effective coverage may dictate more wells placed closer together. Thus, understanding the transverse width over which significant oxygen is passively released to the aquifer (the “radius of influence”) is a critical design parameter and the focus of this thesis. Due to the difficulty in getting a passively released dissolved oxygen plume to transversely encompass the total width of a contaminant plume, other more efficient means of introducing oxygen into the subsurface are required. Injecting amended water directly into a release well would increase the transverse distance in which dissolved oxygen would spread. A series of experiments were conducted at CFB Borden to assess the efficacy of an oxygen releasing technology called the iSOC™. The experiments were all conducted in the same manner, by connecting a tank of oxygen to the iSOC™ unit, which then was placed in a release well and allowed to run in experiment 1 for 103 days, experiment 2 for 132 days and experiment 3 for 29 days. iv Dissolved oxygen concentrations were measured at varying time intervals throughout each experiment using an Orion dissolved oxygen probe. Results of each of the three experiments were very similar in that dissolved oxygen was only detected in a very narrow plume (10 cm to 25 cm in width) within 1 m of the release well. The presence of BTEX, BOD and COD within the groundwater and soil at the site were investigated to assess if presented a significant enough sink for the oxygen and thereby limiting the transverse growth of the dissolved oxygen plume. Groundwater results indicated that while dissolved oxygen was utilized for BTEX degradation and to overcome the natural oxygen demand (both BOD and COD) at the site, the amount of oxygen released into the aquifer would have satisfied both of these processes. The COD of the soil at the site presented a higher oxygen demand than the groundwater and presented a greater limiting factor to the transverse growth of the oxygen plume. By releasing oxygen passively with the iSOC™ only a small transverse portion of the Borden aquifer was likely influenced. This limitation has been noted in general for passive release technologies (Wilson & Mackay, 1995). While the iSOCÔ technology develops very high oxygen levels in the groundwater in the release well, it does not overcome the hydrogeological constraint of limited transverse dispersion. Thus, a high oxygen concentration is delivered to a very narrow segment of the aquifer. Overall, transverse dispersion has a minimal impact on a passively release oxygen plume, particularly in close proximity to the release well, but once the plume has migrated a distance away from the release well the effect of transverse dispersion increases. The oxygen demand of an aquifer can also limit the effect of transverse and longitudinal dispersion. If a site has a high chemical or biological oxygen demand the released gas will be consumed before dispersion can have an effect on the plume. By injecting nutrient rich water into a release well the water will forcibly overcome any influence transverse dispersion will have in and around a release well, thereby relying on longitudinal dispersion to create a larger area for contaminant degradation to occur.