The bracketing breakdown: An exploration of risk tolerance in broad and narrow choice frames 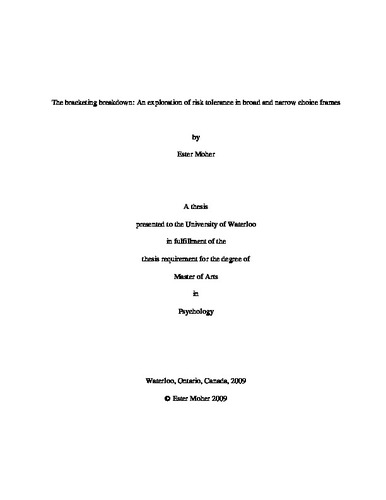 The field of decision making has largely focused on the influence of contextual factors on risk tolerance. Much work has focused on how the problem itself is presented, in hopes of understanding the circumstances under which individuals may be helped in areas of long-term investment and planning through encouragement of greater risk tolerance. Specifically, when making financial decisions, it has been suggested that by presenting individual decisions in groups (Gneezy & Potters, 1997), or by presenting feedback less frequently (Thaler et al, 1997), participants are able to process individual problems in a holistic manner, which encourages risk tolerance when deciding. This literature has typically made claims that these effects are dependent on how the problem is presented. However, evidence for the benefits of “broadly bracketed” problems often relies as much on the presentation of aggregated outcomes as it relies on the grouping of problems. The purpose of this thesis was to further examine whether bracketing effects might be attributable to manipulations of problem framing or outcome framing. In addition, it has been suggested that perhaps individuals who differ in processing styles might respond differentially to framing effects in general (Frederick, 2005). That is, perhaps individuals who are more intuitive decision makers might be more susceptible to context-based changes, and so might show larger framing effects. Deliberative decision makers, on the other hand, might overcome these framing effects by reflecting on, or actively “reframing”, the problem. A secondary purpose of this thesis was thus to investigate individual differences in the magnitude of the bracketing effect on risk tolerance. In Experiment 1, problem and outcome bracketing were examined in the domain of discrete choices, while in Experiment 2, bracketing was examined with continuous iv investments. Results suggest that when investment opportunities are identical, problem framing encourages long-term risk tolerance. However, when choices are somewhat different from one another, as is often the case in real-world investment situations, outcome information is critical to encouraging long-term risk tolerance. Together, results suggest a critical reevaluation of the bracketing hypothesis and its application to long-term investment.