The Ten Stone Ranges Structural Complex of the central Mackenzie Mountains fold-and-thrust belt: a structural analysis with implications on the Plateau Fault and regional detachment level 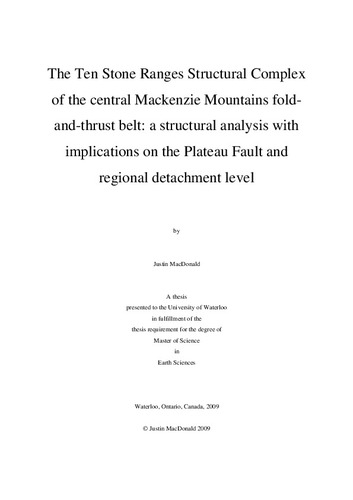 The Cordilleran Orogen affected majority of the western margin of ancient continental North America in the Cretaceous, which is well recorded in the Foreland Belt. The Mackenzie Mountains fold-and-thrust belt is located primarily in the westernmost Northwest Territories and easternmost Yukon Territory in northern Canada. The mountains are often described as the northern extension of the Rocky Mountains to the south which are one of the world’s best examples of a thin-skinned fold-and-thrust belt. Within the Mackenzie Mountains, Neo-Proterozoic through Cretaceous sedimentary rocks record the Laramide aged deformation, with a range of structures that vary in size and complexity. Previous mapping by the Geological Survey of Canada produced a series of reconnaissance maps that are still in use today, many of which are available in only black and white. This study is focused on a part of the 1:250 000 scale NTS 106A Mount Eduni map sheet from Geological Survey of Canada reconnaissance mapping in 1974. The study involved re-mapping a large panel at 1:50 000 scale to better understand the structural geometry, regional shortening and the depth of the underlying detachment level. Through systematic geologic mapping and structural analyses, this study presents a balanced regional cross-section, numerous serial cross-sections and a detailed geologic map of the study area, the Ten Stone Ranges Structural Complex. The serial cross-sections were used to define the geometry of the Cache Lake Fold, a large fault-bend-fold system that involves a folded thrust fault and complicated subsurface geometry. In addition to this, the sections confirmed that the TSRSC is a transfer zone whereby a series of thrust faults and décollement folds are responsible for much of the displacement and shortening in the Mount Eduni map sheet. The balanced regional cross-section was constructed across a number of key structural elements, in particular the Plateau Fault, a regional structure with a > 250 kilometer strike length and the subject of much debate as to its geometry. In addition to this structure, the cross-section transects the Cache Lake Fold and the Shattered Range Anticline, a regional box shaped anticline that was used for a “depth to detachment” calculation. By examining the regional detachment level estimated from the balanced cross-section and calculating the detachment depth using the Shattered Range Anticline the detachment depth was found to be – 11.3 kilometers below the current erosional level. This study is the first structural analyses of the Mount Eduni map sheet, particularly the Ten Stone Ranges Structural Complex, and has resulted in an estimate of the detachment depth for the area, a shortening estimate of > 7 kilometers across the 50 kilometer line of section and a displacement estimate for the Plateau Thrust of > 20 kilometers.