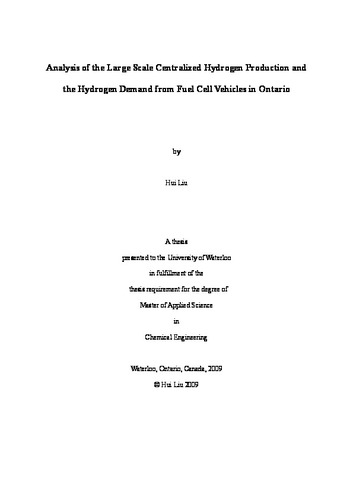 The ‘Hydrogen Economy’ is a proposed system where hydrogen is produced from carbon dioxide free energy sources and is used as an alternative transportation fuel. The application of hydrogen on board fuel cell vehicles can significantly decrease air pollutants and greenhouse gases emission from the transportation sector. There must be significant transition of infrastructure in order to achieve the hydrogen economy with the investment required in both production and distribution infrastructure. This research focused on the projected demands for infrastructure transition of ‘Hydrogen Economy’ in Ontario, Canada. Three potential hydrogen demand and distribution system development scenarios were examined to estimate hydrogen fuel cell vehicle market penetration, as well as the associated hydrogen production and distribution. Demand of transportation hydrogen was estimated based on the type of hydrogen fuel cell vehicle. Upon the estimate of hydrogen demand from fuel cell vehicles in Ontario, the resulting costs of delivered hydrogen were investigated. In the longer term hydrogen is expected to be produced by utilizing nuclear heat and a thermochemical production cycle. A brief survey of thermochemical hydrogen production cycles was presented with a focus on S-I cycle. Sequential optimization models were developed to explore the minimum utility energy consumption and the minimum number of heat exchangers. Finally an optimal heat exchanger network for S-I thermochemical cycle was defined by a mixed integer optimization model using GAMS.