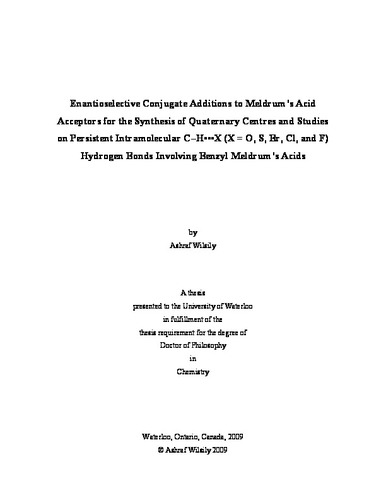 The construction of benzylic quaternary stereocentres via the enantioselective copper-catalyzed 1,4-addition of dialkylzinc reagents to Meldrum’s acid acceptors in the presence of a phosphoramidite ligand is reported. Meldrum’s acid acceptors can be easily accessed and numerous derivatives have been prepared to investigate the scope of the enantioselective 1,4-addition. The reaction is tolerant to a wide range of heteroaromatic and functional groups. The significance of substituting the position para, meta, and ortho to the electrophilic centre is also highlighted. Primary and secondary organozinc reagents are shown to be compatible in this reaction. A highly enantioselective synthesis of carboxylic acid derivatives having an -quaternary centre through copper-catalyzed 1,4-addition of dialkylzinc reagents to aryl acetate derivatives is also described. This method employs a commercially available phosphoramidite ligand and readily accessible Meldrum’s acid acceptors. A brief insight into the observed selectivity is also discussed. The significance of this method was established by the expedient preparation of chiral diesters, succinimides, γ-butyrolactones, and isocyanates from highly functionalized benzyl Meldrum’s acids. In addition to 1,4-addition, the enantioselective asymmetric synthesis of benzylic tertiary and quaternary stereogenic centres via 1,6-addition of dialkylzinc reagents to Meldrum’s acid acceptors is outlined. This work represents one of the early examples of 1,6-asymmetric conjugate addition reactions and discussions on the regioselectivity of the process are disclosed. On a different subject matter, the occurrence and persistence of C–H•••X (O, S, Br, Cl, and F) bond in solution using 1H NMR spectroscopy is discussed for a large number of benzyl Meldrum’s acids. The latter are novel and reliable probes for the evaluation of this type of non-classical interactions in solution. The persistence of the C–H•••X bond in solution is demonstrated to be dependent upon structural features present on the aromatic moiety and the benzylic position of the benzyl Meldrum’s acid derivatives. The observations presented highlight the large potential of Meldrum’s acid in developing an understanding of the function and nature of C–H•••X interactions.